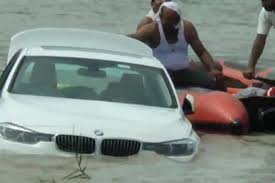 An angry birthday celebrant who expected a Jaguar as his birthday present, did the unthinkable when he pushed the brand new BMW he was gifted into a river.

The man was frantically expecting a Jaguar which he believes is more expensive and befitting as a birthday present.

The Jaguar on the other hand is said to be worth about 4.5 Million Rupees.

The man was seen in a video posted on social media trying frantically to rescue the car which had floated in the river and gotten stuck on the bank of a tall grass in the northern Indian state of Haryana.