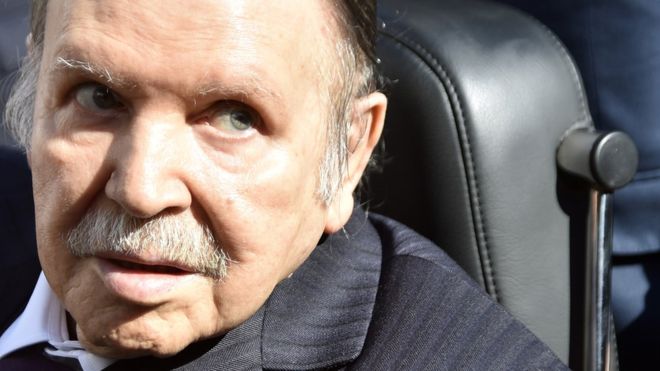 For many Algerians it is difficult to understand how their 82-year-old president, who suffered a stroke six years ago and can hardly walk or talk, can run the country.

This turned to disbelief when it was announced that Abdelaziz Bouteflika was running for a fifth term in April – he did not even turn up in person on Sunday to register his candidacy.

A wave of anger has moved students, teachers, lawyers and even journalists onto the streets in protest – they seem determined not to accept the continued status quo of rule by a virtually invisible leader.

Many worry that a failure to find a successor to President Bouteflika, who came to power in 1999, could lead to instability should he die in office.

His last known public address was in 2014 – a victory speech to thank Algerians for their renewed confidence in his leadership after he won the last presidential election.

He mentioned plans to “reinforce separation of powers, strengthen… the role of the opposition and guarantee rights and liberties”.

Some viewed this as a sign of policy changes to come to ensure a smooth transition of power, yet there has been no evidence of this and his appearances since have been few and far between.

Algerians may have been lucky enough to catch brief glimpses of him on state television greeting visiting foreign dignitaries.

Or catch him at the opening of a new conference hall in 2016 – the footage shows him in a wheelchair, looking weak and tired, but alert.

But it was not until 2018 that it was clear that his party was pushing him forward as a contender for this year’s elections.

He was at the opening of a restored mosque and two metro stations in the capital, Algiers. A few weeks later he was given a tour to see the construction of the Great Mosque of Algiers, a $2bn (£1.52bn) project billed as being the third biggest mosque in the world.

Yet again, however, the president, who won elections in 2014 despite doing no personal campaigning, does not have any strong challengers.

So why have the ruling coalition and the opposition not been able to put forward other viable candidates?

The opposition has historically been too divided – and as the president grew older and frailer the bickering within the ruling elite, including the army, has paralysed any political change.

The ruling National Liberation Front (FLN) has ruled the North African nation since gaining independence from France in 1962 after a bloody seven-year war.

“Le pouvoir” (the power), as many Algerians have come to describe those who run the country, has been centred around the party, some powerful generals and prominent businessmen.