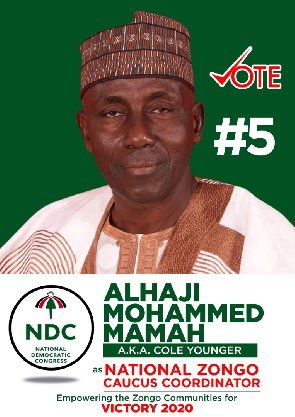 In a statement issued by the National Zongo Caucus Coordinator of the NDC, Alhaji Mohammed Maman, the NDC rebutted assertions by the Minister that some 15 Million Ghana Cedis has been expended on various projects including Astro Turf Parks, allowances for Arabic teachers, boreholes, ICT training and the Aboabo Drainage also known palele in Kumasi.

The Minister made the announcement during the presidential encounter last Wednesday December 19, 2018.

But the opposition NDC has rubbished the assertions by the Minister saying all the projects he mentioned are non-existent and that the Minister must come clear.

‘’ The Zongo development fund budgetary allocation for 2017 was Gh 218million and in 2018, Gh 100 million was allocated to the ministry, which gives us a total of Gh 318million out of which Gh 15million has been expended. Where is the rest?’’ they questioned.

The statement continued ‘’clearly, there are many questions begging for answers and will not be far from wrong to assume that the GH 318million meant for the development of our zongos has ended in some private pockets as usual of the Nana Addo led NPP administration’’.

See the full statement as issued by the NDC.

NO EVIDENCE/ ACCOUNT OF 15 MILLION CEDIS EXPENDITURE BY ZONGO MINISTRY

The NPP and its penchant for falsehood to deceive the good people of Ghana now seems to hit its all time low.

The Minister for inner city and Zongo affairs in answering questions on zongo projects which was referred to him by the incompetent Nana Addo who exhibited lack of knowledge of what is happening in the country at the the last presidential press encounter for 2018, made the following claims.

That the ministry has spent 15 million Cedis on the following projects:

We are requesting on the minister to come clear on the projects mentioned above since there is nothing to show for the above claims.

Ordinarily, I would not have wasted time glorifying them with a response, but let me set the records straight for the benefits of the ordinary Ghanaians :

The aboabo palele is currently choked with silt all over the place. If it rains today the whole place will be flooded. It is therefore not true that the ministry has worked on the drainage to stop flooding. The minister should come clear as to what work was done , and how much did it cost Ghanaians.

We are aware that President Mahama secured funds from the French government to reconstruct the drainage. It was advertised and procurement process was started. Since JDM left office in January 2017 nothing has been heard about the project again. The insensitive Akufo-Addo/Bawumia government has abandoned the project for people of Aboabo and its surroundings to wallow in suffering.

At a time when other districts have been promised factories, schools, hospitals and theatres, all our zongos got is a meagre GH15m budget allocation. And to make matters worse, we now been told that the money has been squandered on just a handful of non-existent Atsro turfs ?

What do these NPP folks take our Zongo peopke for? Use us to do all their dirty works, win elections and dump us thereafter?

It is a matter of fact that the only Atsro turf in nearing completion now, is the one at sukura losso park a suburb of Accra.

Built and managed by a presidential staffer by name LORD komey as a profit making venture.

Even though there was an attempt to construct one at Fadama in hornor of the National chief imam this has been abandon by the contractor for non payment of money due the contractor.

The zongos were still promised another astro turf in eastern region and another in the Ashanti region and madina in the greater Accra region. none of these promise has been fulfilled thus not a single Astro turf is in use so Mr President how did you use our GH 15 m?

We are yet to be told by the Zongo minister and by extension the president, if our Arabic schools teachers take double allowance as our last checks reveals the JDM administration reintroduced allawace to the Arabic school teachers under a YEA mudule.

How can the same teachers take allowances under the YEA mudule and then go ahead to receive from the alleged disbursement of a GH 15 m from the zongo development fund?

Are Ghanians and for that matter our zongo people not suprised that the minister was not bold enough to repeat his claim for using the development fund in training the zongos how to cook wakye and Hausa coco?

I am still wondering who will do the teaching .

Finally, the Zongo development fund budgetary allocation for 2017 was Gh 218million and in 2018, Gh 100 million was allocated to the ministry, which gives us a total of Gh 318million out of which Gh 15million has been expended. Where is the rest?

Clearly, there are many questions begging for answers and will not be far from wrong to assume that the GH 318million meant for the development of our zongos has ended in some private pockets as usual of the Nana Addo led NPP administration.