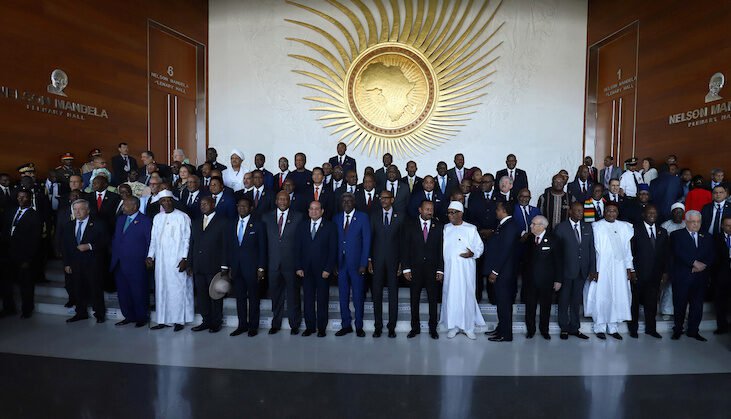 Ghana has been selected as the country to host the secretariat of the African Continental Free Trade Area (AfCFTA).

A review committee said Ghana was awarded the right based on regional balance formula.

Ghana beat six other countries; namely, Egypt, Eswatini, Ethiopia, Kenya, Madagascar and Senegal, which had submitted their bids to host the secretariat.

The announcement was made when the African Union launched the operational phase of the AfCFTA at an Extraordinary Summit of Heads of State and Government in Niamey, the capital of Niger.

The secretariat’s primary mandate will be the implementation of the agreement, which has been ratified by 25 countries, according to the African Union.

Leaders at the African Union summit in Niger will also set a date for trading to begin in the African Continental Free Trade Area, a deal that 52 of the continent’s 55 states have signed, although only 25 have ratified it.

The bloc aims to ultimately remove trade barriers and tariffs between members.

The agreement is aimed at creating a single continental market for goods and services with free movement of goods, people and investments, similar to the European Union.

The AU Commission’s Commissioner for Trade and Industry Ambassador, Albert Muchanga, announced that Benin had agreed to sign the AfCFTA agreement during the Extraordinary Summit, thereby becoming the 54th signatory state.

This comes three days after the Nigerian presidency announced that President Muhammadu Buhari will sign the agreement.

A statement by the presidency said that Nigeria will be seeking to include terms that engender the development of policies that promote African production, among other benefits.

Eritrea is the only African Union member state not to have signed the agreement.

According to the United Nations Economic Commission for Africa, the AfCFTA is, by the number of participating countries, the largest trade agreement since the formation of the World Trade Organisation.

The secretariat will bring at least some 150 expatriate jobs with ancillary benefit, including foreign exchange flow from member states contributions and which would be good for the cedi.

In addition, a lot of locals will be hired to service the secretariat, and Ghana will have a strong edge in trade policy on the continent.

Ghanaian businesses will, upon the full operation, access the entire African market for true free movement of goods, which means more volumes of products and more jobs.

The pact aims to boost intra-African trade by making Africa a single market of 1.2 billion people and a cumulative GDP over $3.4 trillion nominal gross domestic product.

The UN Economic Commission for Africa (UNECA) estimates that the implementation of the agreement could increase intra-African trade by 52% by 2022 compared with trade levels in 2010 and double the share of intra-African trade currently around 13% of Africa’s exports by the start of the next decade.

Among the AU member states that did not sign the pact are the continent’s two largest economies – Nigeria and South Africa. Botswana, Lesotho, Namibia, Zambia, Burundi, Eritrea, Benin, Sierra Leone and Guinea Bissau are the other member countries which did not sign the pact.

Tariffs on 90% goods to be removed

Under the CFTA, governments commit to removing tariffs on 90% of goods produced within the continent.

According to a research paper published by the United Nations Conference on Trade and Development (UNCTAD) in February 2018, the CFTA offers many opportunities for sustainable development and economic growth in the African economies.

However, not all countries will benefit to the same extent, and the gain of welfare benefits also implicates relevant costs and commitments.

Most of the benefits of further trade integration (i.e. welfare benefits from lower import prices, production efficiency and increase in outputs,  higher value-added jobs and exports, technological specialization, etc.) will materialize in the long term, while most of the associated costs of adjustment and integration (i.e. loss in trade tariff revenue, local SME’s vanishing in front of stronger competition, adjusting unemployment, required investment in infrastructure, political and regulatory reforms, etc.) will be incurred in the short term.

A full Free Trade Agreement (FTA) eliminating all tariffs in the CFTA could generate welfare gains of $16.1 billion, at the cost of $ 4.1 billion in trade revenue losses (representing 9.1% of current tariff revenues).

Trade deficit is expected to drop by 50.9%

Intra-African trade growth is estimated at 33% and the continent’s trade deficit is expected to drop by 50.9%.

In a scenario in which the sector with the highest current tariff revenue would be exempted from liberalization, UNCTAD simulations estimate a welfare gain of $ 10.7 billion in the long term.

Intra-African trade to grow by 24%

Intra-African trade is expected to grow by 24%, while, Africa’s trade deficit only shrinks by 3.8%.

The agriculture sector is extremely relevant for the African economies since it employed about 53% of the continent’s labour force in 2016.

Governments are worried about possible adverse impacts of the CFTA on the agriculture sector’s economic growth, which would massively affect employment across the continent.

Even though the largest employment growth rates are found in manufacturing and services sectors, agriculture sub-sectors are also expected to grow.

Despite the many benefits this agreement will render, not all the countries are expected to benefit equally from the free trade agreement.

It is vital that African countries commit to continue improving their institutional capacities to efficiently tax and redistribute the gains from the CFTA.

This includes integrating and harmonizing regulatory measures, eliminating non-tariff barriers to trade and investment, and facilitating the entry into the formal economy.

Another key factor to fully exploit the potential benefits of the CFTA is infrastructure.

Addressing Africa’s physical infrastructure gap will require $93 billion per year worth of public and private investment.

Even though African exports to the world are undiversified and mostly composed of raw materials, Intra-Africa exports (exports between African countries) contain more value-added products.

Manufactured goods represented 43% of intra-Africa exports during 2012-2016 while only representing 20% of exports to the rest of the world.

Medium and high technology manufactures represented 25.4% of intra-African trade in 2015, but only accounted for 14.1% of Africa’s exports to developed countries and 13.7% of the continent’s exports to the world.

As such, countries with large manufacturing bases and enabling physical and industrial infrastructure, such as South Africa, Kenya, Egypt, Morocco, and Ethiopia are in a better position to gain the expected benefits of the CFTA.

Agriculture will also benefit from the creation of a more viable African marketplace for food. Enhanced trade in agricultural products will also promote agro-processing and further sectoral linkages with manufacturing.

Even though the CFTA is a great step forward towards economic integration, there is still a long road ahead. African governments must commit to keep working so that the gains from the CFTA are distributed as fairly as possible, making sure no one is left behind, and ensuring that the CFTA becomes a catalyst for sustainable economic development for the continent as a whole.