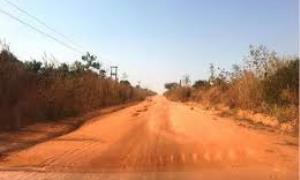 The major commercial road that links Ghana to her neighbors such as Togo and Burkina Faso through the Bawku route popularly called “Bolga- Bawku- Pulmakuom road” is a 110km stretch from Bolgatanga the capital of Upper East region to Pulmakuom the last town in the Upper east region that shares boarder with Togo to the east.

This road upon the cry of traditional leaders and meaningful citizens from communities along this stretch over the deplorable nature of the road over the years, and its effects on transportation and the health of the people, the then government awarded the road to a Brazilian contractor (Querios Galvao) and a Ghanaian contractor, Mawums construction Ltd.

On the 11th of July, 2016 the government at the time, cut a sod for the start of the contract. It was resolved by government and the contractors that, the contract should be done in 910 days from the day the sod was cut.

Both contractors came on side and work started progressively at some part of the stretch, the road was graveled.

Travelers, businessmen, leaders and health workers were happy over the progress of works on the road. Unfortunately, “joy has a slim body that breaks too soon” after 2016 election in the country when there was change in government, the work on the road was stopped and leaders told the people they were going to review the contract.

We kept our quiet and waiting for the review hoping that work will continue, which would have “immobilized our fractured joy”

Today as I write, the part of the road that was graveled has now become a major contributor to the rise in some health problems in travelers, communities and houses along the road. It has also increased the burden on health facilities and health care providers within that part of the region.

Somewhere last year when this was noted, a curious follow up later revealed that most of those reporting to the health facilities with respiratory tract infections such as; rhinitis, sinusitis, pharyngitis, cough and others, ear infection mostly otitis media and eye infection mostly conjunctivitis  has a history of recent travel along the dusty Bolga- Bawku- Pulmakuom road. It is obvious that the dust along the road carry a lot of disease causing organisms into traveler’s nose, ears, mouth and skin thereby, causing infections and diseases.

The regional hospital in Bolga is the referral facility for all the facilities in the region, referrals from Garu, Pusiga, Bawku, Zebilla, Nangodi and Kongo have to always carry patients along this road in a chameleon style due to potholes and semi-streams on the road this has always worsen referral cases that ply this route, there are usually no other route to be used though.

A patient was referred to the regional hospital on an account of suspected spinal injury, the relatives said it was better they stayed than accept the referral to take the patient through the said road which they claim was even more dangerous than the patient’s present condition.

It is immunologically clear that the immunity of neonates (children less than one month) is not well developed as compared to adults so they easily get infection, pregnant women with complicated labour from Garu, Bawku and Zebilla area who are referred to regional hospital to deliver, will have to ply this same dusty road with their neonates after discharge, these neonates ends up with several complex respiratory problems (acute respiratory distress syndrome) and skin infections, some even die in the end.

I am a residence in the area and any time I ply the road I have to manage some respiratory tract infection, many of my neighbour’s, relatives and friends have complained same.

Most of the accidents that occurred at the road were as a result of the dusty nature of the road, drivers and riders are not able to see coming vehicles which sometimes lead to crashing. These incidences has increased as compared to previous years, this contributes to the increased road traffic accidents (RTA) in DHIMS.

It is important that any one traveling along this stretch should use a nose mask (handkerchief to tie nose, ears and mouth) especially those who uses vehicles the glasses cannot be closed and wear clothing’s that covers your skin to protect you against the noxious dust.

I am equally placing a call on government and other concern institutions to show a relentless interest in completing the road to help prevent/minimize some of these uprising health conditions and disease that is gradually engulfing our future work force and leaders, increases absenteeism of workers due to infections acquired along the road, prevent the avoidable accidents along the road, reduce burden on health workers and reduces expenditure on health at the area.

Nearby district assemblies can also to be encouraged by government and leaders around the area to always use their water tankers to water the dusty part of the road to minimize the inhalation (breathing in) of dust by travelers and users of the road and its accompanying problems, this is definitely cheaper than the cost of taking care of the conditions it brings forth.

“If there is anything that is daring to the hearts of the citizens of the upper east region, it is the completion of the Bolga- Bawku- Pulmakuom road”