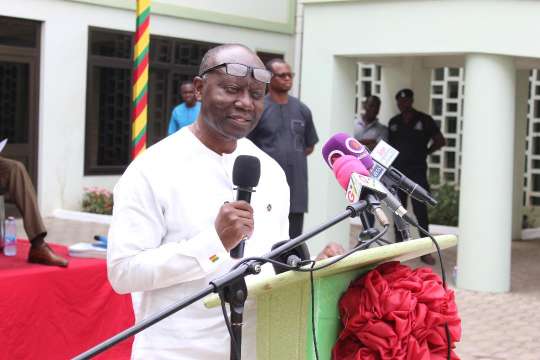 The Minister of Finance, Ken Ofori-Atta, has assured Parliament that the government and the Bank of Ghana (BoG) are on top of efforts to slowdown the depreciation of the cedi against its major counterparts.

Mr Ofori-Atta said the 30 per cent in public spending this year was meant to augment policies by the central bank to strengthen the currency and reduce the rate at which it was losing its value against the likes of the US dollar, the euro and the British pound.

The minister, thus assured Parliament today that the pace of depreciation would slowdown in the coming days as the measures begin to make impact.

He was answering a question the Member of Parliament for Bongo, Mr Edward Abambire Bawa on the fortunes of the currency.

The MP had filed an urgent question in the House, demanding answers on what the Finance Ministry is doing to slow down the increases of petroleum product prices at pumps with respect to imposed taxes and levies on the petroleum products and the depreciation of the Cedi.

Making his appearance today, Wednesday, Mr Ofori-Atta said: “Speaker, the Bank of Ghana is leading the interventions to contain the depreciation of the Cedi.

“The Ministry of Finance is complementing this effort through its fiscal consolidation measures and real sector interventions.

“The implementation of the 30 per cent cut in expenditures and other expenditure measures approved by Cabinet are all helping to reduce the fiscal deficit and thereby reduce the pressures on the exchange rate,” he said.

He added that the government was undertaking real sector interventions, including the Ghana CARES programme, to support imports substitution of products such as poultry and rice.

This, he said would help to reduce the foreign exchange pressures from the imports of those products.