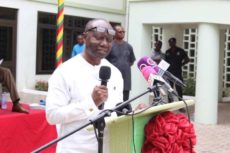 The Minister of Finance, Ken Ofori-Atta, has assured Parliament that the government and the Bank of Ghana (BoG) are on top of efforts to slowdown the depreciation of the cedi against its major counterparts. Mr Ofori-Atta said the 30 per cent in public spending this year was meant to augment policies by the central bank […]