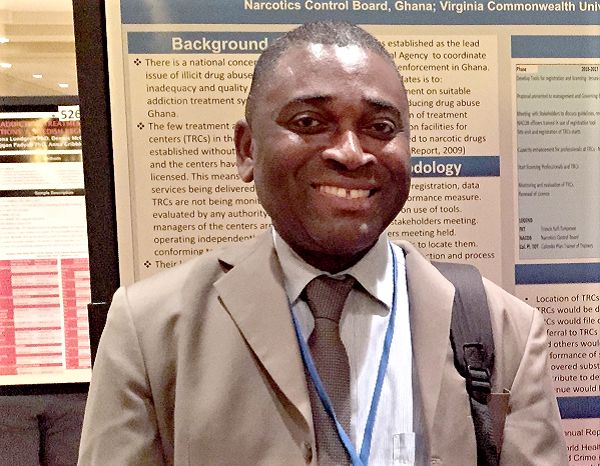 Two officers of the Narcotics Control Board (NACOB), both operatives, have been interdicted for allegedly aiding and abetting drug barons in the narcotics trade.

George Dunyah, a driver of NACOB’s Investigation Department, who is an uncle to the Acting Executive Secretary Francis Kofi Torkornoo, is alleged to be the kingpin.

The second person interdicted is one Jerry Anan Tetteh, stationed at the Kotoka International Airport (KAI).

When contacted, NACOB declined to comment on the development.

According to information, even though they were busted over six months ago, they were still in service due to protection enjoyed from the top management of NACOB.

However, the top management of NACOB had no choice but to interdict them following a revelation in the media that some officers of NACOB were aiding and abetting drug barons.

According to sources, after noticing that there was pressure from some key partners and civil society organisations due to the revelations in the media, the Acting Executive Secretary had no option but to constitute a three-man facts-finding committee within his office, which sanctioned the two suspects secretly.

Sources alleged that staff of NACOB were not informed about the sanctions imposed on the two suspects.

Meanwhile, the sources said staff were surprised by the news that one normal swivel chair for NACOB cost GH₵10,000.

According to the sources, the contract was signed after the invoice was generated by the procurement head upon the consent of the acting executive secretary, Francis Kofi Torkornoo, at the blindside of the deputy executive secretary, Michael Addo, and the Divisional Supervisor in charge of Administration, Seth Mensah, who signed the contract with the supplier in 2018.

Meanwhile, widespread discontent and anxiety among staff of NACOB are reaching tipping point and impacting negatively on the operations of the institution.

The situation has been attributed to what some workers describe as the management style of Mr Torkornoo, as well as lack of a governing board to provide direction and a hold on promotions in the service since December 2014.

Information gathered from some workers of NACOB who do not want to be named for fear of victimisation reveals that the workers have no room for redress because the institution has no governing board since November 2014.

Following the arrest of Nayele Ametefe at the Heathrow Airport for exporting 12.5kg of cocaine through the Kotoka International Airport (KIA) to the United Kingdom (UK), the governing board at the time, which provided strategic/policy direction to the national anti-illicit drug agency, was dissolved in November 2014.

Since the dissolution, the management and policy direction of the outfit has been in the hands of the Acting Executive Secretary and a few other officers.

By law, the executive secretary is responsible for the day-to-day administration of the agency.

The workers earlier told The Finder that the effectiveness of NACOB has been called into question by several groups and individuals, but nothing has changed because there is no governing board to monitor performance, provide direction and whip management into line.

According to the workers, capacity-building courses outside the country are given to persons in the good books of Acting Executive Secretary.

They explained that some go more than twice in a year whereas others have not benefited at all.

The workers were concerned about the lack of motivation, especially stalled promotions and inadequate working tools.

In April 2017, the Minister of the Interior, Ambrose Dery, during a visit to the NACOB headquarters in Accra, asked officers to stay calm as issues involving their conditions of service and promotions were being resolved.

The Minister’s admonition followed media reports that some officers were protesting vigorously against management for failing to address issues of salaries, promotions and upgrades in the ranks of both junior and senior officers.

Ambrose Dery did not answer calls The Finder placed to his phone neither did he reply to text and WhatsApp messages asking why NACOB still has no board.

The concerned workers are particularly worried about the inaction of the agency to tackle the increasing use of illicit drugs among the youth, particularly in educational institutions and some rural communities.

Also of concern is the increasing cultivation of marijuana in certain parts of the country.

They have, therefore, appealed to President Nana Addo Dankwa Akufo-Addo to come to the aid of the outfit to ensure that the right things were done.

NACOB was established in November 1990 as the central co-ordinating body for dealing with the rising incidence of drug abuse in the country and the threatening dimensions that illicit drug trafficking had taken globally, sub-regionally and nationally.