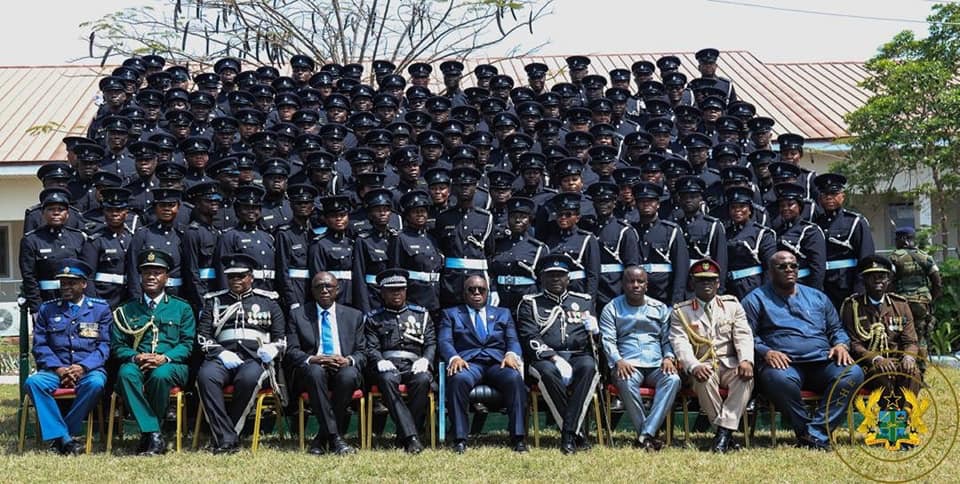 The President, Nana Addo Dankwa Akufo-Addo, has stated that Government, in spite of the many challenges it inherited, has begun the process of retooling and equipping the Ghana Police Service.

According to President Akufo-Addo, this is in fulfillment of the New Patriotic Party’s 2016 Manifesto pledge of resourcing the Police Service sufficiently, so the men and women of the Service can continue to maintain law and order, and protect lives and property.

“Government, in December 2017, acquired some one hundred and eight (108) vehicles for the Service, and in support of Operation Calm Life; and I followed this up, three weeks ago, when I handed over two hundred (200) Toyota vehicles for use by the Police,” the President said.

He continued, “The construction of three hundred and twenty (320) housing units to ease the problems of accommodation is ongoing, and the numerical strength of the Service is being boosted by the recruitment of four thousand (4,000) men and women this year alone.”

President Akufo-Addo was speaking at the Graduation Parade of the 48th Officer Cadet Course of the Ghana Police Academy, at the Tesano Police Depot, on Friday, 16th November, 2018.

The President also indicated that a considerable backlog of promotions of personnel have been cleared in my time.

“Between January 2017 and now, some twenty-two (22) months, a total of seven hundred and ninety-five (795) promotions of senior police officers, and sixteen thousand, six hundred and twenty-three (16,623) promotions of junior ranks, have been effected,” he added.

President Akufo-Addo assured that Government will continue to ensure that the police personnel are properly trained, properly equipped and provided with incentives to enable them discharge professionally their duties and obligations without interference from any quarters.

“We are also developing a comprehensive policy to enhance the professional competence and capacity of the police to assist them in dealing with cyber-crimes and cyber security related issues. Additionally, the Marine Unit of the Service will be resourced to work in tandem with the Ghana Navy to deal effectively with threats to our maritime boundaries and resources,” he indicated.

Whilst acknowledging that there are still some issues to be addressed, the President reiterated the commitment of Government to ensuring that “accommodation and equipment needs of the Ghana Police Service” are systematically resolved to enhance efficiency and morale.

With the Police Service currently suffering low public image than it should have, as per the 2017 Afrobarometer Report where 92% of respondents believe that “some, most or all” police officers are involved in corruption, the President stressed that this can no longer be the status quo.

“The citizenry can only have confidence in the Police Service when they are seen to be honest, and prepared to enforce the law without fear or favour. I am comforted by the fact that the current leadership of the Police Service is determined to buck this trend, and you, our newly graduating class, should assist in this endeavor,” he added.

The President further admonished the Police Service to retain their neutrality and professionalism guaranteed under the Constitution.

With Governments having term limits, the President noted that the Police Service should not tie its well-being or otherwise to the fortunes of the ruling party of the day.

“As President, and together with you, men and women of the Police Service, we must ensure that the Police Service is left to focus on its core mandate. I envisage a Police Service that goes about its duty of protecting ordinary citizens confident that there will be no interference from the powers that be”, he added.