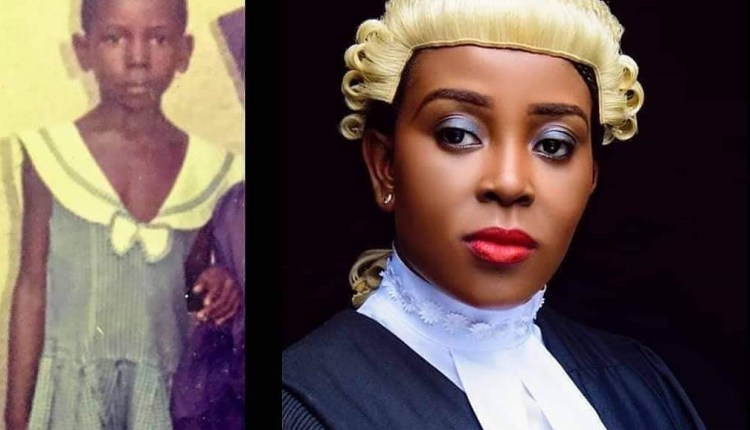 A beautiful female lawyer has shared an emotional life-story of how she shared food with dogs after her mother abandoned her.

Awele as she is known, narrated how she was abandoned by her mother when she was barely 7 months old.

According her, she mostly ate left-over food as a result of the ill and maltreatment she suffered at the hands of her step mother.

She shared her story on social media, indicating the various struggles she had to go through including being starved, to her current status as a budding legal practitioner.

Read her full story below;

I was abandoned by my mother at the age of seven months (7months) with my father and stepmother. My stepmother was mean. I endured all manner of maltreatments she meted at me. Sometimes I went hungry for days. She would so starve me that I would be seeing death. On one occasion, I was very hungry that I had to eat our dog’s leftovers food. Our neighbor’s son caught me eating the dog’s leftover food (eba and egusi) and he told his mother who later that evening invited me to her house and asked me if what her son said was true.

I was so terrified that I begged her not to tell my step mother, because she will kill me if she knew that I ate the dog’s leftover instead of throwing it away. The woman wept and promised to give me food everyday without my stepmother’s knowledge, a promise she kept till we left the compound. As if starving me was not enough punishment, my Stepmother flogged me mercilessly until I would faint at times. She would also apply pepper in my vagina, eyes, armpit and neck, tie me up and abandon me in one of the toilets for days without food. Despite all these experiences,

I was very bright academically and was loved and favored by God and people. I knew that the only way to escape was to achieve educational success, so I never joked with schooling. So you see, I have every right to be hateful, bitter, jealous, arrogant, sad, negative and toxic but I chose not to.