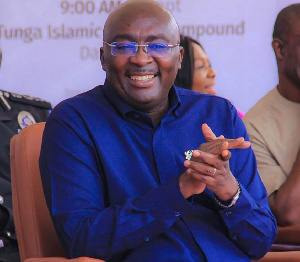 Senior Vice President and Policy Analyst with Imani Ghana, Kofi Bentil has eulogized the Vice President, Dr. Mahamudu Bawumia on the occasion of his 59th Birthday.

According to him, the Vice President is blessed and it is clear.

Mr. Bentil who took to his Facebook Page to celebrate the Vice President and sighted by BestNewsGH.com, described Dr. Bawumia as a strong tree which even though bends in the storm, never breaks.

He further noted that the Vice will stand through every storm and that when it is all done, he will wave his leaves and branches in victory when the calm comes after the storm.

Describing himself as a cheer leader for the Vice President, Mr. Kofi Bentil who is also a practicing Lawyer and Managing Partner at Lex Praxis Incorporated said he will be there clapping and that he will not be surprised at the huge achievements of the Vice President.

He added emphatically that he knew the Vice President is made of the right stuff.

Read his full write-up below:

You are a strong tree. You will stand through every storm.

When its all done, you will wave your leaves and branches in victory when the calm comes after the storm.

I will be there clapping. I won’t be surprised. I know you’re made of the right stuff.