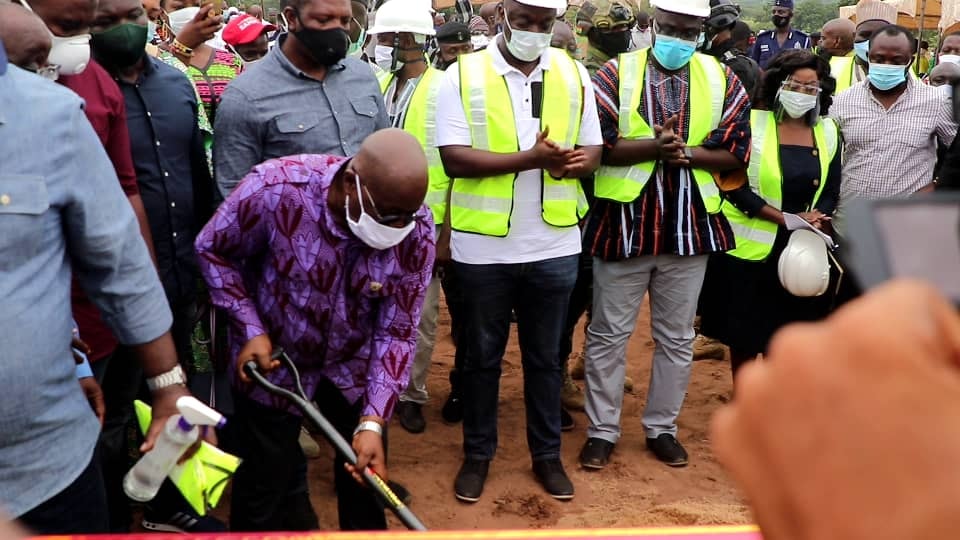 The Youth Employment Agency (YEA) has commenced the construction of an ultra-modern office complex in the newly created North East Region.

The office is one of four to be constructed in the newly created regions.

Sod for the construction of the one-storey edifice was cut by President Nana Addo Dankwa Akufo-Addo at the North East Regional Capital, Nalerigu on Tuesday, July 28, 2020.

Mr. Justin Kodua Frimpong said the construction of the Regional Office is in response to President Akufo-Addo’s call for government agencies to have administrative offices in the newly created regions.

‘’Your Excellency, the YEA office in North East is one of its kind. In 2017 when you appointed us Management and Board of the Youth Employment Agency, we realized that since 2006, the YEA programmes had been on module, from 2006 to 2017, the Agency was rather recycling unemployment, but per your directive, we introduced four key initiatives, the YEA Job Centre, the YEA Flagship Programmes, the YEA work Abroad Programme and the Artisanal Directory. Your excellency the new office which we’re about commission today will have the YEA Job Centre. The essence of the Job Centre firstly is to provide a database of the youth in North East and this will help us in proper planning as an Agency and also as government. It is going to help us to also know the educational background of our Youth and the number of males and females we have in the region’’ Mr. Kodua Frimpong told President Akufo-Addo.

The building which will be completed in 5 months, will have the YEA Job Centre, the Regional Flagship Project Office, Skills Training Hub, The Regional Director’s Office, Store House Facility, and a car park among others.

The Board Chairman of the YEA, Mr. Sammi Awuku said the Agency has commenced the process of owning multi-purpose Youth Resource Centres across the country.

He said the Oti, Ahafo and the Western North Regions will all see the construction of the Multi-Purpose office complex in order to connect the youth in these regions to the required jobs that they clamour for.

Mr. Awuku expressed gratitude to the Management and staff of the YEA for the way and manner they’re prosecuting its mandate saying ‘’Let me say a big congratulations to the Management and the YEA team. They’ve done a fantastic job. Upon the instructions of the Board, we decided that we’re charting a new course for the Agency. We’re grateful that Mr. President has given us the inspiration, the support and the encouragement all these years. He served as a father figure for us as an Agency. He entrusted the running of the Agency in the hands of young people when many people doubted our capacity and our capabilities to deliver and this goes to prove that indeed this president is someone who has enormous confidence in the youth and their ability to also rise to the occasion when it matters most.

President Akufo-Addo on his part eulogized Mr. Awuku and Mr. Kodua Frimpong for their transformational leadership at the YEA.

The President said ‘’The YEA since it had its new leadership under Sammi Awuku and Justin Kodua has become a new organization in terms of its efficiency and effectiveness and the type of services it is offering the young people of Ghana. We want you to continue that way and to say that what they’re doing here today, putting up an office, an infrastructure, office is all very important, but the most important thing is the work that will be done when these offices have been put up. That is what I want to leave with you. The various skills and services that you’re offering the young people of Ghana, the more effective you can do your work, the better our population will be, the happier our young people will be and greater will be the progress of our nation’’