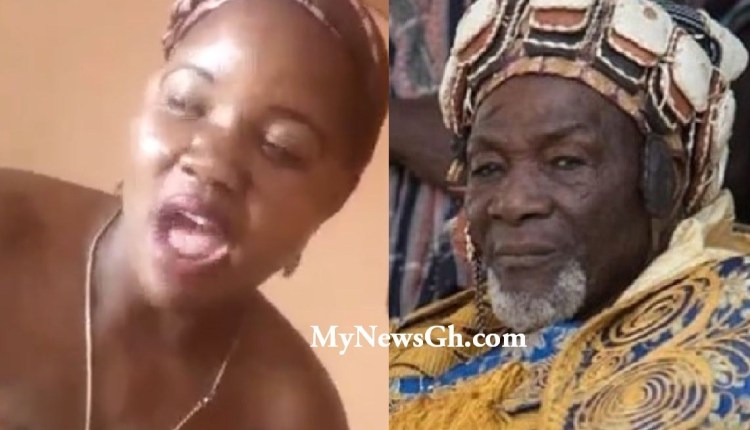 There is raging anger among residents of Dagbon following the release of a video by one of the wives of Ya-Naa Abukari Mahama II on Facebook shading those who were wishing her husband dead last week, MyNewsGh.com reports.

The anger among indigenes especially those who are abreast with the customs and traditions of the area, reveal to MyNewsGh.com it is as a result of the embarrassing spectacle by the woman who should know better and that it is rare to always see the wives of the overlord of Dagbon even in public gatherings for security reasons.

But in the video that has gone viral, the woman who is partially naked claims to be the wife of the Ya-Naa and is happily saying in Dagbanli that those who expected them to be widows and their children orphans have all been shamed because Ya-Naa Abukari Mahama II is not dead as claimed.

In the less than a minute video, a lady believed to be her friend introduces the wife of the Chief and says “Ya-Naa’s wife says I should tell you that she is not a widow yet. She is here swagging and taking selfie videos”

The wife of the Chief then takes over and says “I greet all residents of Dagbon and wish to inform you that we are not widows yet and we will not be widows again. Our children have also not become orphans. Nobody can kill the Ya-Naa because he will live long”

He disclosed to MyNewsGh.com that the information making the rounds on various social media platforms is untrue and a fiction of someone’s imagination insisting the overlord is hale and hearty.

Ya-Naa himself who later spoke, revealed he was not dead as claimed and is not even afraid to die because he is a true Muslim and believes that every individual will die someday no matter what, so he does not fear death.

He assured his subjects he is not dying soon though death is inevitable stressing that he will live long enough to lead the people of Dagbon and achieve his the targets he has set for himself.