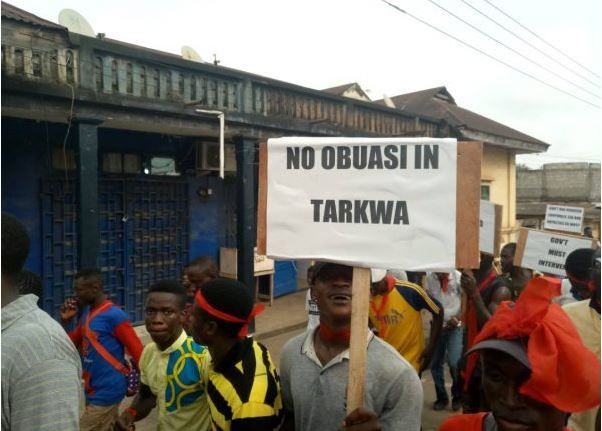 Residents of Tarkwa in the Western Region are up in arms against government for failing to fulfill promises of providing them with good roads.

Some youth from the area, joined by their chief burned car tyres and chanted war songs to register their displeasure when the Lands and Natural resources Minister including some officials went there to conduct some government business.

It took the intervention of the police in the area to avert what could easily have passed for a clash.

The indigenes of the area blame government for not living up to its promise of dealing with the poor road networks in the area.

‘’Government promised us that it will cater or all the bad road networks in this area because they told us the bulk of the country’s money is gotten from here, Bogoso and  Obuasi and other mining towns and they have not done anything about it. We will show them that we can’t be taken for granted’’ they argued.

They are therefore threatening to vote against the government in the next election should nothing be done about their concerns.

But the MCE for Tarkwa Nsuaem, Gilbert Ken Asmah in reaction said the Assembly lacks the resources to work on the roads now.

He is impressing upon the mining companies operating in the area to come tougher to compliment government effort by working on the roads, adding that the Assembly is already in talks with the mining community on the issue.