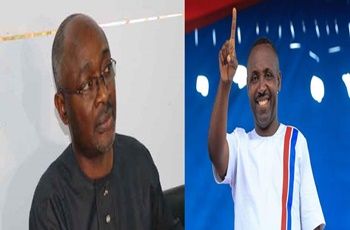 General Secretary of the ruling New Patriotic Party (NPP) John Boadu is upbeat about the party and government fulfilling most of its key promises to the Ghanaian people.

His comments come on the back of the rulings against embattled Ghanaian businessman, Alfred Agbesi Woyome by the Supreme Court and the African Court on Human and Peoples Rights in the 51 Million Ghana Cedis scandal which has raged on for  a couple of years now.

The NPP, then in opposition promised to retrieve the amount from Mr. Woyome for the state.

The rulings according to the NPP chief scribe is a victory not only for the party in terms of a fulfillment of its campaign promise, but a victory for the country as a whole.

Speaking on Accra based Peace Fm, Mr. Boadu averred that the Woyome issue was one that the party held dear and vowed to bring to a closure, to the benefit of the generality of the Ghanaian people, which is to get the money for the state.

Mr Boadu said “NDC didn’t want us to talk about the Woyome issue. This matter is close to our heart . .  I believe it’s a plus for us . .  it is a promise we made that has been fulfilled. I believe it is a victory for us,”

He assured that government was not going to relent in efforts to effectively and efficiently prosecute all corruption cases, to ensure that the public purse is protected.

A Supreme Court verdict by Justice Alfred Benin ordered the sale of several properties belonging to Mr. Woyome to offset the 51 Million Ghana Cedi judgement debt that was wrongfully paid to him.

The properties include two executive buildings located at Trassaco in Accra, the office complex of Anator Holdings, a company owned by Woyome, two residential buildings at Caprice and Abelemkpe, both suburbs in Accra, as well as a mining quarry owned by him in the Eastern Region of Ghana.

The properties are estimated at GHc 20 million.