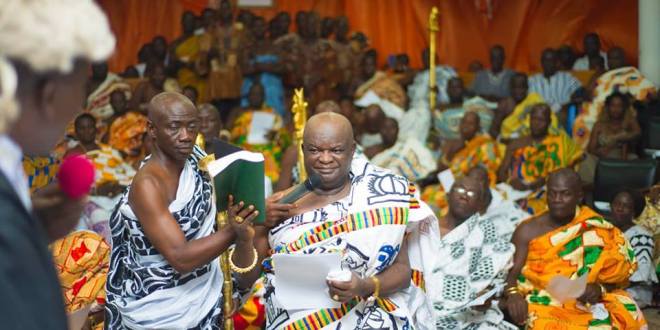 The paramount Chief of Sefwi Wiawso Traditional Area in the Western Region Katakyie Kwasi Bumangama has expressed joy at the attainment of some 99.58 percent ‘yes’ votes in the just ended referendum that automatically paves the way for the creation of the North-Western Region out of the Western Region.

According to him, this attainment of the regional status signifies the independence of his people and a dream come true having been under Sekondi all this while.

Katakyie Kwasi Bumangama said the battle for a regional status for his people has raged on for more than 47 years saying ‘’ we are very excited that after 47 years we have attained our own independence from Sekondi. We wish to thank the president, Nana Addo Dankwa Akufo-Addo for this magnanimous move. This signifies freedom and independence for our people. We are no longer under Sekondi. If we look back at what we have been through for the past 40 years and we have been able to vote and attain our independence, we the people of Western-North thank the government so much’’ he added.

He explained that the new status is bound to come with it, the attendant development and economic prosperity that has eluded the people for a very long time now, adding that this feat will go down in the history of the country as the best thing to happen to the people of the Sefwi Wiawso area.