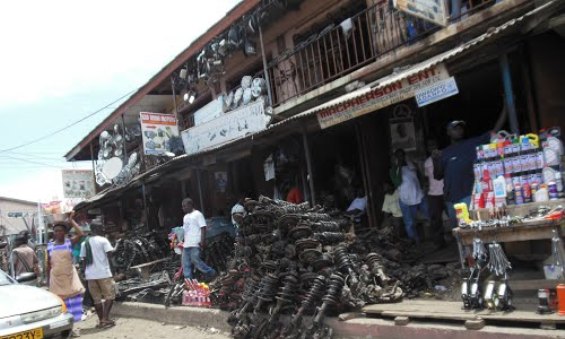 Some spare parts dealers at Abossey Okai say they will not relocate to Afienya in line with plans by the Greater Accra Regional Coordinating Council.

Describing themselves as National Spare Parts Dealers Association, they argue that Afienya will not be in their interest.

At a press conference in Accra Tuesday [May 10, 2022], they said it was only some members who were spearheading the move but not all spare parts dealers in Abossey Okai are in favour of the move to Afienya.

The Greater Accra Regional Coordinating Council (RCC) has planned to relocate all spare parts dealers from Abossey Okai in Accra to Afienya.

According to the RCC it is part of the campaign to “Make Accra work.”

The government has identified a land in Afienya and was working towards allocating it to the spare parts dealers.

The land, according to the Greater Accra Regional Minister, Henry Quartey is owned by the government and that letters have already been sent to the Lands Commission under the Ministry of Lands and Natural Resources for the allocation.

Meanwhile, a co-chairman of the Abossey Okai Spare Parts Dealers Association, Clement Boateng has said majority of their members of agreed to relocate to Afienya.

In terms of numbers, he told Graphic Online’s Juliet Akyaa Safo that about 90 per cent of them have agreed to move