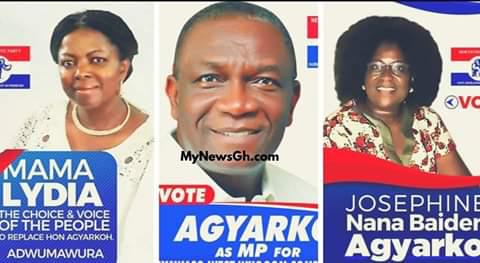 Polling station executives of the ruling New Patriotic Party in the Ayawaso West Wuogon Constituency have vowed to resist any attempt to impose an ‘outsider’ on them as the party’s candidate in the by-election, occasioned by the demise of the Member of Parliament for the area, Emmanuel Kyeremateng Agyarko.

The leaders, mostly polling station executives are rooting for the ex-wife of the late MP, popularly known as Lydia Alhassan, who they describe as a grassroots person who has been with them through thick and thin.

One of the leaders, Eric Boakye who the NPP polling station  organizer for Tesano said they were peeved with machinations by the party’s national executives to impose a different candidate on them.

So far two names have popped up and these names have come with some controversy, the fact being that the late MP’s first wife, who is the Mama Lydia woman, has risen against the current wife of the MP by name Josephine Nana Baiden Agyarko, who perhaps is the NPP national headquarters’ favourite to replace the fallen MP.

The irate polling station executives stormed the party headquarters yesterday with a petition, indicating their disagreement with the national executives on their choice for the contest.

It is unclear whether the party will yield to pressure by the constituency executives.