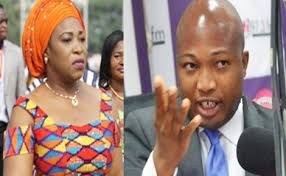 Ranking Member of Parliament’s Foreign Affairs Committee, Samuel Okudzeto Ablakwa says the Minority in Parliament are still for answers to the numerous questions they raised with regards to the controversial Norway chancery deal.

He said ‘’we also do not have answers to those who presented drawings to the seller for renovations to commence to suit Ghana’s taste. We still do not have answers to those who authorized the application to Norwegian authorities for a permit to convert the said property from a residential facility to a Chancery for Ghana. We are still in search of those who told the construction workers renovating the property that they were working for a Chancery project in the name of Ghana as this is what they told our investigative team when they arrived to tour the facility on the 13th of December, 2018’’.

The opposition National Democratic Congress (NDC) Member of Parliament for North Tongu constituency in the Volta Region in a statement he authored yesterday, December 31, 2018, recounted how the deal would have been sealed by Midnight of yesterday and a whopping 16 million dollars of the tax payer’s money lost to corruption under the current government.

‘’Despite all the vicious name-calling and attempts to obfuscate the issues by a rather well coordinated onslaught by agents of Government as a manifestation of what some experts are beginning to describe as militant propaganda – the incontrovertible fact which remains unchallenged and unimpeached by Government itself is that but for the vigilance of the Minority in Parliament, this spectacularly questionable transaction would have been concluded latest by midnight today with massive financial loss to the Ghanaian taxpayer’’ he said.

Mr. Ablakwa explained further that government’s claims that it has not expended any monies as far as the deal is concerned cannot be true, based on the fact that the Ministry of Foreign Affairs has admitted that it sent teams to Norway with respect to deal saying ‘’ As for Government’s claim that it has spent no money so far on this transaction; the discerning Ghanaian can reconcile that with Government’s own assertion that it has sent teams to Norway on a number of occasions to discuss this transaction, engaged the services of international lawyers, agents and valuers, not forgetting the extensive  reconstruction works to suit Ghana’s specifications. The full truth will surely be known someday’’.

‘’What is clear though is that we have not seen the end of this scandal. Fortunately for us, it does appear the Norwegian authorities are on a manhunt for all those involved in what has been described in Norway as an unethical transaction. It is also assuring to note that the Finansavisen Newspaper continues to pursue it’s own multiple investigations into the mysterious deal. The coming days promise to be exceedingly interesting and eventful’’ he added.