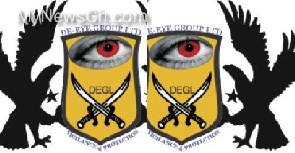 Secretary to the alleged militia group operating from the Osu Castle by name De-Eye group, Tracy Asamoah has rubbished assertions that the group’s activities were illegal, explaining that they rather took the youth off the streets and made them useful citizens.

According to her, the group bridged the gap between party members who helped in diverse ways to bring the party to power and government in terms job placements.

Speaking on Accra based okay Fm, Ms. Asamoah said the group assembled such people, most of whom are degree and diploma holders and offered them skills, in the interim, that will keep them off the streets while they await job placements as and when such jobs are available.

She said most of the members of the group have been roped into the Nabco and Youth Employment Modules and are working for the country, and cannot be described as a militia or people involved in any illegal enterprise.

She said the group sought permission from the estates department at the presidency who released the keys to portions of the Osu Castle to them, adding that the president, Nana Addo Dankwa Akufo-Addo was not even aware they had pitched camp there.

She opined that the Osu Castle was left at the mercy of the weather and that the entire place was not habitable, a situation that forced them to get painters and carpenters to work on the portion they occupied, before they moved in.

‘’For two years now, none of us have been paid but we have taken it upon ourselves to do the work. So if it the Manasseh Azure Awuni that I know at Krachi Secondary who did this investigation, then I want to tell him that this is too cheap for undercover. Because as we speak, we have some of our members at Nabco, we have some at the police hospital, we have some at the Forestry Commission, and we have those with the community police. All these people are working, so I don’t know what the actual motive of the whole thing about militia is’’ she added.