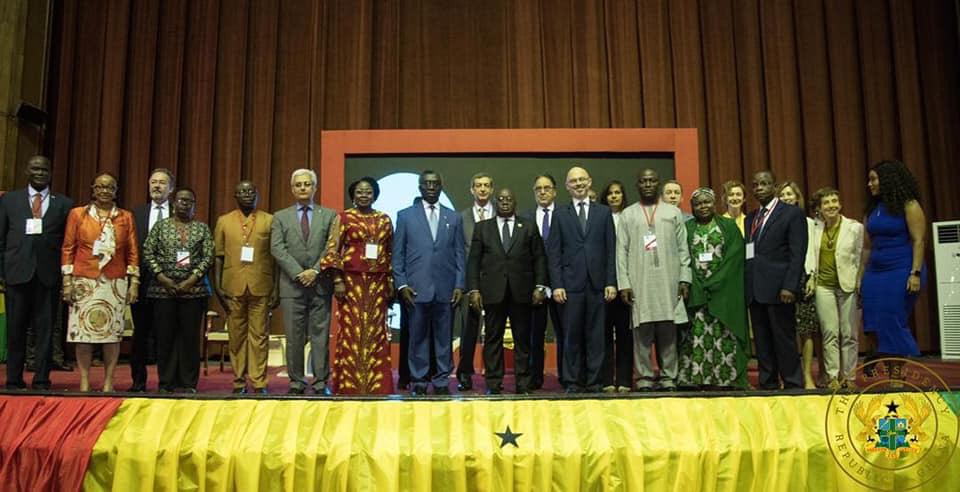 The President of the Republic, Nana Addo Dankwa Akufo-Addo, says measures to deal with the phenomenon of climate change are contained in his Government’s Co-ordinated Programme of Economic and Social Development Policies.

According to President Akufo-Addo, Government’s flagship programmes such as the programmes for “Planting for Food and Jobs”, “One-Village-One-Dam”, and “One-District-One-Factory”, are all geared towards boosting industrialisation and rural development, as well as building Ghana’s resilience to the impacts of climate change.

“These policy initiatives are already yielding positive results to the attainment of the SDG goals, particularly the goal of reducing our carbon emissions,” he said.

Additionally, the President noted that he recently announced a major policy boost for distributed renewable energy, also, to deal with climate change.

“Soon, the seat of our nation’s presidency, Jubilee House, will be powered by solar energy. We have placed a ban on illegal mining, the phenomenon we call ‘galamsey’, which was destroying our water bodies, vegetation and our forests. Some twenty thousand (20,000) young people have been engaged to plant more that 10 million trees in two years to create jobs, and restore degraded land,” he added.

President Akufo-Addo made this known on Wednesday, 20th March, 2019, when he delivered the opening speech at the High-Level Session of the Africa Climate Week, held at the Accra International Conference Centre.

Though the discourse on Climate Change has different dimensions, the most important aspect of it is that majority of nations across the world have committed to tackling it by reducing the current global temperature to a 2 degrees celsius minimum, well below pre-industrial levels, and pursuing efforts to limit the temperature increase to 1.5 degrees celsius above pre-industrial levels.

Describing climate change as the biggest threat to the realisation of the SDGs, President Akufo-Addo noted that it has become an issue of grave concern to most leaders across the world, as it has considerable impact on the fundamentals required for our survival on earth – rise in sea levels, severe and extreme weather conditions, such as droughts, floods and erratic rainfall patterns, and growing desertification.

“For us on the continent, the Africa Climate Week is an important occasion, because the ravages of climate change affect us the most. This week-long event affords us the opportunity to showcase the progress we are making in tackling this phenomenon, as well as deepening the partnerships required at the global level to combat it,” he said.

The President posited that Africa suffers the most because her economies are largely susceptible to the effects of climate change, and her capacity to withstand its shocks are low.

“Agriculture, water and energy are essential drivers of developments in our countries, but, at the same time, are characteristically sensitive to changing climate. For the sake of our generation, and that of generations yet unborn, we have a solemn duty to take immediate, bold and concrete steps to protect global climate from warming beyond unbearable limits,” he said.

President Akufo-Addo continued, “It is in own interest to act to salvage the economic fortunes of the continent, and, more so, step up our collective efforts to fight decisively climate change. The recent Intergovernmental Panel on Climate Change (IPCC) report concludes that the global community has only twelve (12) years to stop climate change, and this requires us to deal with climate change more aggressively than we have in the past.”

Whilst striving to halt climate at the national level, he indicated that a lot also has to be done at the international level.

“One major issue of concern to us is the need to streamline access to international climate finance to complement national funding. I believe this forum will throw more light on practical ways to mobilise financial resources to support the implementation of national climate actions,” President Akufo-Addo said.