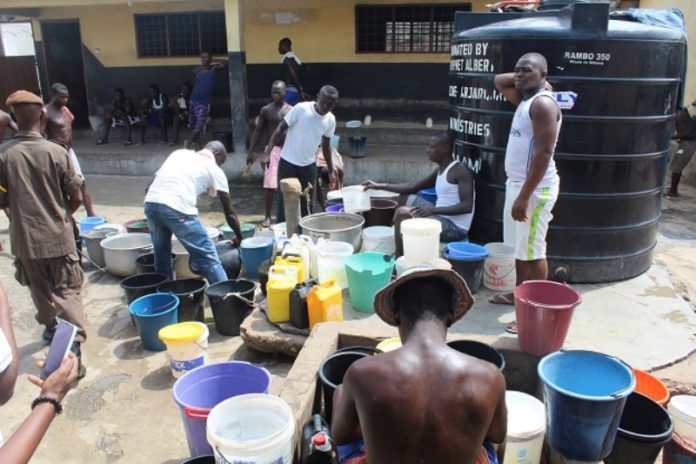 Water shortage has hit the Koforidua Prison at Effiduase in the Eastern Region, leaving the inmates unable to bath and wash their clothes regularly.

The situation has led to skin irritation and infections among the 800 inmates.
The prison was originally built to accommodate 400 inmates.
Due to the heat and the overcrowded nature of the cells, the prisoners, who are ideally supposed to bath three times daily, have had no choice but to stay days without a bath.
This came to light when journalists from some selected media houses visited the prison to assess inmates’ accessibility to safe water as part of activities to mark this year’s World Water Day, which was commemorated on March 22, 2019.
This year’s celebration was on the theme: “Leaving no one behind”.
The Officer in charge of the Koforidua Prison, Deputy Director of Prisons (DDP) Mr Benedict Bob Dery, conceded that chronic water shortage had been a major challenge at the prison and Effiduase before he was posted to the facility four years ago.

He did not mince words in highlighting the effects of the lack of safe water on the lives of the inmates and the entire prison environment.
“You cannot imagine the discomfort that the inmates go through. The daily lives of the prisoners are affected by the water crisis. We are compelled to depend on the Ghana National Fire Service (GNFS) to supply us with a tanker of water in a day, but that is not enough and sometimes they are unable to meet our request,” he said.
To respond to the situation, Mr Dery said, some contingency plans had been put in place to deal with the water shortage and conserve water.
The measures included restricting inmates’ showers, flushing of cell toilets and the washing of clothes, he said.
He said the Koforidua Prison was not initially built as a prison but was a colonial structure for weaponry which was later converted to a prison to cater for 400 inmates.
“But it now has to hold twice the number of its original capacity. The lack of water makes it impossible for the inmates to bath and wash as regularly as they have to and this creates conditions conducive for the spread of diseases,” he said.
The prison, he added, depended on reliable water supply to Effiduase, where the facility was situated, from the Ghana Water Company Limited (GWCL), but since the area experienced water shortages, the inmates’ need for water currently was in competition with the needs of the inhabitants.
Mr Dery also said the two mechanised boreholes at the prison had broken down and the administration required GH¢8,000 to repair them at a cost of GH¢4,000 each.
Long queues
Ten minutes after the team of journalists arrived, the standing pipes, which had been dry for the past week, started flowing, leading to inmates placing all manner of receptacles in a long queue at the pipes to get water.
In separate interviews, three inmates shared their views on the situation.
One of the leaders of the inmates, Mr Winifred Dzatse, 40, who has served nine out of his 15-year jail term, said prisoners had had to bear the brunt of health and safety hazards associated with the inadequate supply of water to the prison.
He pointed at the five water storage tanks with 1,000-gallon capacity each and said: “They are all empty. For the past one week we have not seen water flow through our taps, and even when the water starts flowing, the pressure is very low and we have to ration what we get.
“We practise what is described as ‘shit-on-shit’ and the toilets are restricted to two flushes in a day. We flush at 7 a.m. and 2 p.m. or when it has been used by more than 10 people. The toilets frequently clog and we have to use sticks to push the toilet down before we flush it with the dirty water collected from the drains behind our washrooms.
“Even if all the water storage facilities are filled with water supplied by the GWCL, we will have only 4,000 gallons of water for the 800 inmates and that will last just three days,” he said.
In such situations, he explained, inmates had access to three cups of water in a day.
“They get a cup of water in the morning, another cup in the afternoon and a cup of water in the evening. They can decide to drink it, use it to wash, brush their teeth or whatever their water needs may be,” Mr Dzatse added.
Appeal
Another inmate, Nathaly Agyeman, 30, who has served three out of his 10-year jail term, said: “Water is essential for drinking, preparing meals, maintaining personal hygiene, sewage disposal and improving on conditions of persons deprived of their freedom like us.”

On common skin diseases in the prison, he mentioned scabies, chicken pox, among others which spread easily, as they were infectious.
“We also have some diseases such as typhoid and malaria. Most of the prisoners have rashes all over their private parts. Here, we sleep with our skins touching one another and conditions do not make it possible to segregate inmates, so that prisoners with skin diseases do not infect other prisoners,” he said.
Another inmate, Mr Courage Gbagbo, 26, who has been at the Koforidua Prison for the past three years, called on the government, non-governmental and civil society organisations, corporate bodies and individuals to go to the aid of the inmates.