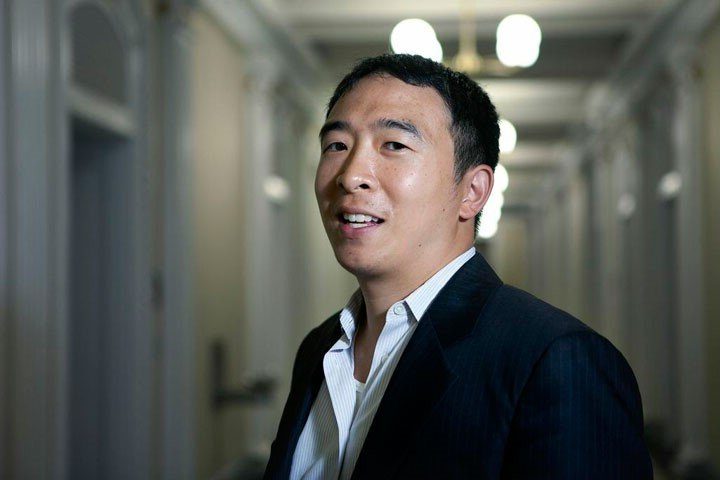 Entrepreneur Andrew Yang has a big goal for a relatively unknown business person: to reach the White House. And he’s aiming to get there by selling America on the idea that all citizens, ages 18-64, should get a cheque for $1,000 every month, no strings attached, from the U.S. government.

Yang, 43, who was born in upstate New York in 1975, will be running as a Democrat, according to his campaign website.

“People who think the antidote to Donald Trump is a boring generic Democrat missed the point. He is a sign of massive institutional failure. On both sides,” Yang said on Reddit on April 2.

A universal basic income (UBI) payment, which Yang calls “the Freedom Dividend,” is one of his major policies.

“The most direct and concrete way for the government to improve your life is to send you a check for $1,000 every month and let you spend it in whatever manner will benefit you the most,” Yang writes on his campaign website.

The government has “plenty of resources, they’re just not being distributed to enough people right now,” he says.

Yang, founder of business fellowship program Venture for America and author of “The War on Normal People: The Truth about America’s Disappearing Jobs and Why Universal Basic Income Is Our Future,” believes a cash handout will improve the mental well being of Americans and encourage entrepreneurship.

“It is impossible to overstate the positive impact of $1k a month on households around the country. It would take people from a constant mindset of scarcity to a mindset of assured survival and possibility. It would transform our society in myriad positive ways by taking the boot off of people’s throats,” wrote Yang on Reddit in March.

“I’ve worked with hundreds of entrepreneurs and most have an incredible mindset of abundance and possibility. A UBI would be the greatest catalyst for arts, entrepreneurship and creativity that we have ever seen,” he said.

Facebook CEO Mark Zuckerberg made a similar argument in his Harvard commencement speech in May. “Now it’s our time to define a new social contract for our generation. We should explore ideas like universal basic income to give everyone a cushion to try new things,” the billionaire said.

Yang settled on the level of $1,000 a month for several reasons, he tells CNBC Make It: First, $1,000 a month was recommended by former Service Employees International Union president Andy Stern in his book, “Raising the Floor: How a Universal Basic Income Can Renew Our Economy and Rebuild the American Dream.” And $12,000 a year brings an individual close to the U.S. poverty line, says Yang, which is $12,752 per person per year for those under the age of 65, according to the United States Census Bureau. Plus, a $1,000-a-month UBI has been studied and modeled by The Roosevelt Institute, says Yang. (It could grow the U.S. economy by 12.56 percent after eight years if paid for by increasing the debt, says the left-leaning institute’s report released in August.)

Finally, $1,000 is low enough to help assuage a common criticism of UBI: that it will discourage people from working.

“It’s virtually impossible to do more than just survive on a thousand dollars a month around the country,” Yang tells CNBC Make It. “It would make a huge difference for families, but it’s not a level that would lead one not to work.”

Automation is driving an urgent need for cash handouts

UBI is necessary, according to Yang, because automation is replacing human workers in manufacturing and threatens jobs in retail, food service and preparation, customer service, transportation, insurance, accounting, medicine and law, he says in a campaign video.

Indeed, some reports are concerning. By 2030, 75 million workers around the globe will need to change occupational category due to automation, according to a December 2017 study by McKinsey Global Institute, and 400 million jobs could be potentially displaced. These estimates are based on analysis of 46 countries that include 90 percent of global gross domestic product and a midlevel pace of adoption of automation.

A report published in March by the Organization for Economic Co-operation and Development (OECD) predicts 14 percent of the jobs measured in 32 OECD countries, or about 66 million jobs, are “highly automatable,” which the report defines as having a probability of being automated over 70 percent over the next 15 to 20 years. Another 32 percent have a risk of being automated at 50 to 70 percent, the report says.

Yang says he is uniquely positioned to see both sides of the automation story in the United States thanks to his work with Venture for America.

“I’m usually highly exposed, where most people in my line of work have not spent six years marching around Michigan, Ohio, Pennsylvania, like Missouri,” Yang tells CNBC Make It. “Most people haven’t spent six and a half years working in these regions with the businesses and entrepreneurs there. And most people probably do not directly know people in Silicon Valley who are working on automating away millions of jobs and know it.”

Under Yang’s plan, the UBI payment would be funded by a “new tax on the companies that are benefiting most from automation,” he says in a video on his campaign’s website.

That tax, he explains, would be a value-added tax (VAT) of 10 percent on goods and services a company produces. (Europe already has a VAT, with rates ranging from 17 percent in Luxembourg to 27 percent in Hungary as of Jan.1, 2018, according to the European Commission.)

The idea of a VAT will become ever more important, according to Yang’s campaign, “because you cannot collect income tax from robots or software.”

“Because our economy is so vast, this would generate between $700 and $800 billion in revenue,” said Yang on Reddit.

Yang points to a 2012 estimate published by Bloomberg that a 10 percent VAT would raise $750 billion. And a 2010 estimate by Eric Toder and Joseph Rosenberg of the Washington, DC-based Tax Policy Center, predicted the United States could have raised $356 billion in 2012 through a 5 percent VAT. At the time, that $356 billion in VAT was equal to 2.3 percent of GDP. Yang doubled the VAT in this estimate for a 10 percent tax, which equals $712 billion.

Eric Toder tells CNBC Make It a 10 percent VAT in the United States could raise anywhere from $500 billion to $1 trillion, depending on how broadly the tax is applied.

“I made a rough calculation that a 10 percent VAT with the same coverage as the average in other countries would raise about $500 billion per year,” says Toder. A typical VAT is levied on 50 percent of total spending on consumption in a country, according to Toder (who references “The VAT Reader: What a Federal Consumption Tax Would Mean for America” published in 2011).

Under Yang’s plan, current welfare and social program beneficiaries in the United States would be able to keep their existing benefits if they prefer.

As for getting a VAT passed, Yang says, “If I become president then there will likely have been a blue wave, and so we would have a majority Democratic Congress.” But he also sees evidence that Republicans can support a cash handout to the North: “The only state right now with a universal basic income equivalent is Alaska and that’s a deep red state.”

Indeed, Alaska has a state-wide version of UBI, and has since 1982, when the state distributed the Alaska Permanent Fund check. The goal was to share the oil riches with future generations. Today, Alaskan residents still get cash handouts from the fund, called the Permanent Fund Dividend. When Zuckerberg visited Alaska in the summer of 2017 as part of his “Year of Travel challenge,” the Facebook executive observed the state’s cash handout program “provides some good lessons for the rest of the country.”

And Yang is not alone in talking about universal basic income.

In March, UBI was adopted as part of the 2018 official party platform of the California Democratic Party at the 2018 California Democrats State Convention, which was published February 25. Silicon Valley start-up accelerator Y Combinator has already conducted a one-year “feasibility study” in Oakland, California, to prepare for a larger study of universal basic income. And in October, Stockton, California’s 27-year-old mayor, Michael Tubbs, announced a universal basic income project for his city, which declared bankruptcy in 2013.

As a relative unkown with just $250,000 raised (including $1,000 from Tony Hsieh of Zappos) and no political experience, Yang is fighting an uphill battle. A candidate must go through a process of state primaries and caucuses collecting delegate votes leading up to the party’s national convention just to be the nominee. And each state has its own uniquely complex rules and processes for getting on the primary ballot.

But fundamentally, says Yang, he’s running for President because he sees a problem that needs to be solved. “I’m an entrepreneur … so you want to try and solve problems. The problem I saw was that we’re going to automate away millions of jobs … so then the question is how can you realistically solve for that?” Yang tells CNBC Make It. “There’s a very limited range of things you can do if you’re genuinely trying to solve that problem, and so that’s how I arrived at running for president.”

Prior to running for President, Yang launched Venture for America in July 2011, a New York City-headquartered organization that trains entrepreneurs in a two-year fellowship program. In recognition of his work with Venture for America, Yang was named a Champion of Change in 2012 and a Presidential Ambassador for Global Entrepreneurship in 2015 by the Obama White House. Yang was previously the CEO of the test-prep education company Manhattan GMAT, which industry leader Kaplan bought in 2009. (Kaplan declined to disclose to CNBC Make It the price at which it acquired the company.)