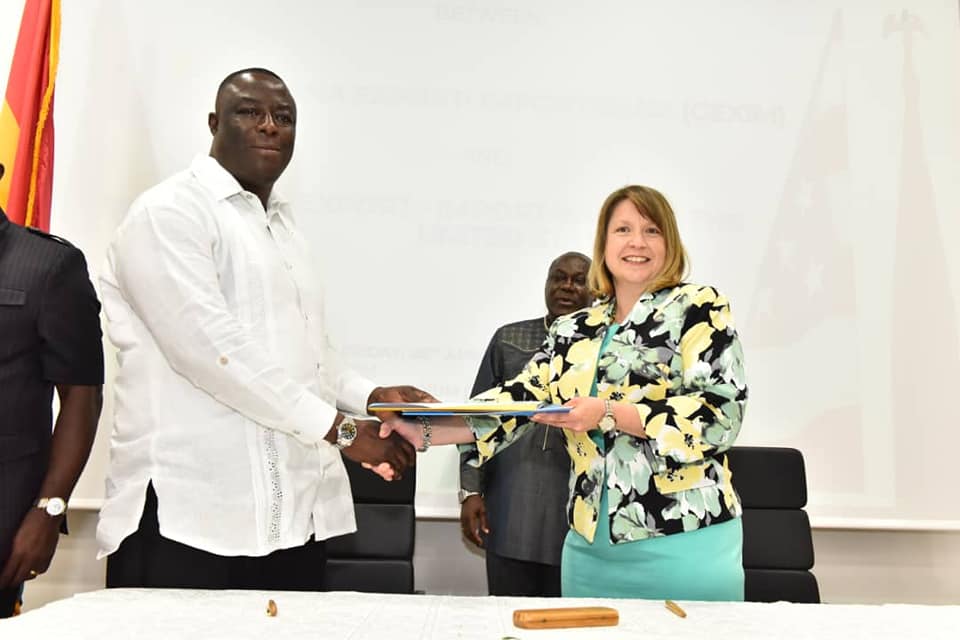 The Export-Import Bank of the United States (EXIM) and Ghana Export-Import Bank (GEXIM) today announced a cooperative framework agreement to finance U.S. exports for Ghana’s industrial development through the establishment of small-scale industries in each of Ghana’s administrative districts.

The announcement was made at a ceremony held this morning at GEXIM’s headquarters in Accra, Ghana. Representing the United States were U.S. Ambassador to Ghana Stephanie S. Sullivan and Bonnie Cybulko, vice president (acting) of EXIM’s Industrial and Project Finance divisions. Among the officials representing Ghana were Minister of Finance Honorable Ken Ofori-Atta and GEXIM CEO Lawrence Agyinsam.

The framework agreement, which is currently in effect, had been signed earlier in April by EXIM Executive Vice President and Chief Operating Officer Jeffrey Goettman and GEXIM CEO Lawrence Agyinsam. The agreement is a statement of intent to cooperate in utilizing EXIM’s medium-term loan guarantees to support financing by GEXIM for on-lending to qualified Ghanaian small and medium-sized enterprises (SMEs) for their purchases of U.S. goods and services. EXIM has set a ceiling of $300 million that can be disbursed in transactions of up to $10 million under EXIM’s medium-term guidelines.

“This cooperative framework agreement confirms EXIM’s commitment to President Trump‘s Prosper Africa initiative and demonstrates our sincere interest in partnering with GEXIM to create economic opportunities and jobs in both Ghana and the United States. We anticipate that the EXIM-backed financing will support the Ghanaian government’s initiative to create sustainable employment throughout Ghana and also will support American exporter and supply-chain jobs in multiple industries in the United States,” Ambassador Jeffrey D. Gerrish, EXIM chairman and president (acting) said in a separate statement.

“I am extremely delighted about this cooperation framework under which EXIM can provide up to $300 million in guarantees for GEXIM’s clients to source and procure machinery and equipment from the United States for their factories. As the lead financing institution mandated to support the government’s “One District, One Factory” program, GEXIM will be better positioned to empower and equip private-sector operators situated in each district to add value to their raw materials through processing and final export,” said GEXIM CEO Lawrence Agyinsam.

Under the agreement, EXIM and GEXIM will create an on-lending structure that allows GEXIM to serve as the borrower and the primary source of repayment for EXIM. GEXIM will on-lend in transactions of up to $10 million to Ghanaian businesses as the end users of the financing, up to a total of $300 million as approved by EXIM. All transactions would be approved individually and are subject to EXIM’s due diligence in finding reasonable assurance of repayment and compliance with all of EXIM’s policies.