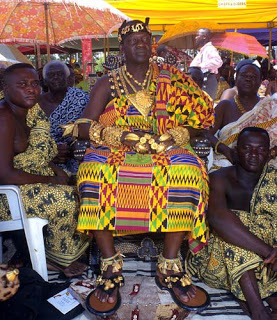 The Omanhene of the New Juaben Traditional area Daasebre Prof. Emeritus Oti Boateng has lashed out at persons who spread “fake news” about freemasonry as a spiritual organization that gets wealth from human sacrifice.

According to him, this misconception is unfortunate and baseless. He said this Saturday when he was honoured as a founding father for the 2019 masonic year by the Grand Lodge of Ghana.

“On the system of freemasonry as a whole and the interdependence of its several parts, it is intended partly to dispel the unfortunate misconceptions, delusions and downright fake news about freemasonry which are baseless and without iota of truth whatsoever”.

“Charity is a distinguishing characteristics of Freemason. Freemasonry is also defined by its charity which blesses those who give as well as those who receive”.

In 2017, former President John Kufuor, who a senior member of the group, also rejected rumors that it is a secretive organisations which thrives on evil activities.

“Freemasonry is an ancient craft and hitherto, it was almost a taboo to talk about it publicly because this is because they did not understand the principles underpinning it.

“Members of the Fraternity at that time, kept the craft under cover, in order to protect its sanctity.”

“From the Church, the high-and-mighty in terms of politics, suspected this craft because they didn’t know much about it so the ‘‘Brethren of Old’’ decided to keep the craft under cover to protect it, not out of malice or evil intentions”.