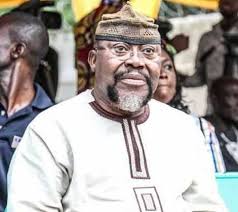 After Dr. Nyaho Tamakloe accused the Akufo-Addo led government of unprecedented corruption in the history of Ghana’s fourth republic, Yaw Adomako Baafi says he should not be taken seriously because he is just doing the bidding of John Mahama and the NDC, ABC News can report.

The former Acting Director of Communications for the NPP is of the view that looking at the trend of the utterances of the founding member of NPP lately, he is not to be taken seriously. This is because Dr. Nyaho Nyaho Tamakloe, Adomako Baafi alleges, has a track record of speaking ill about Akufo-Addo and the NPP without any basis.

The Legal Practitioner explained that in the run-up to the 2016 General Elections, Nyaho Nyaho-Tamakloe urged Ghanaians not to vote for then candidate Akufo-Addo “because he cannot rule Ghana and will not do any proper thing for Ghana. First of all, when he said these things, Ghanaians did not heed to his advice but voted for Akufo-Addo. This implies that Ghanaians already do not trust him. Secondly, most of the things that he said Akufo-Addo cannot do like Free SHS, Planting for food and jobs, various railway lines, National Identification etc have successfully been implemented. If such a person comes to make corruption allegations, do we have to believe him? Again based on what proof that he is saying Akufo-Addo is corrupt?”

Adomako Baafi continues that as has been the case, the suspended NPP stalwart has begun a campaign to project former President Mahama and his brother, Ibrahim Mahama’s bidding at the expense of the party he claims to belong to.

“Nyaho-Tamakloe’s mentality and perception have shown where he belongs. Prior to 2016 elections, he was all over the place claiming he is related to Mahama and since blood is thicker than water, he has thrown his support behind Mahama. We understand him. He has made us understand he is working for his nephews, Mahama and Ibrahim who are staunch figures in NDC”, the NPP Communications team member asserted.

He continued that with the help that Dr. Nyaho Tamakloe has received from NPP, he should not have uttered those baseless accusations.

According to Adomako Baafi, Nyaho-Tamakloe only managed to serve as an ambassador in a previous NPP government, hence the need for him to show some gratitude to the party.