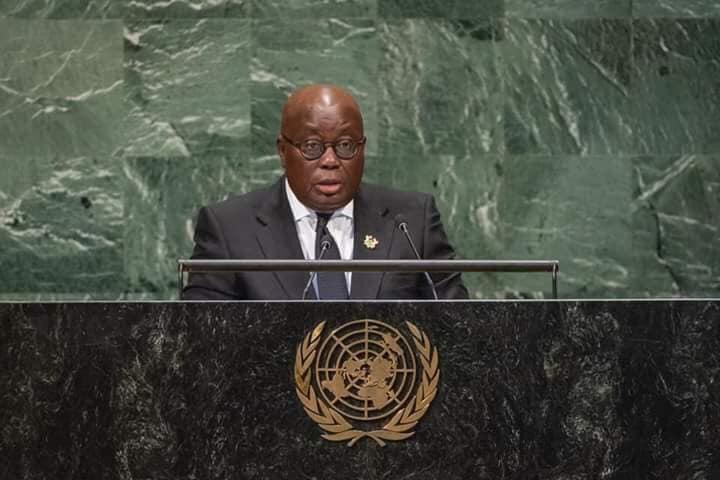 The President Nana Addo Dankwa Akufo-Addo, says the time has come for the reform of the United Nations to better suit the present day needs of the world.

According to President Akufo-Addo, when some of the nations of the world gathered in San Francisco 73 years ago and signed the landmark document that created the UN, it was a very different world from what we have today, adding that “it is a different world we currently live in, and we should accept that this organization must change to suit contemporary needs.”

President Akufo-Addo made this known on Wednesday, 26th September, 2018, when he addressed the 73rd Session of the United Nations General Assembly, at the UN Headquarters, in New York, U.S.A.

Reiterating his confidence in the UN as being the organisation that provides the best vehicle for all nations to address their aspirations and challenges, the President noted that Ghana has always displayed her belief in the United Nations and sought to contribute her share in making the organization a successful one.

“We have embraced the SDGs and integrated the seventeen ambitious goals into our national vision and budget. We intend that Ghana will in July 2019, take her turn to present our Voluntary National Review during the ECOSOC High-Level Political Forum, and we will share our successes and challenges as well as opportunities for new and continuing partnerships,” he said.

However, President Akufo-Addo noted that the stark reality of today is that resolutions, norms and any number of votes in the Security Council and General Assembly mean nothing without the political will to enforce them.

“We are still to come to terms with what the role of our organization should be. Should it just be a club of nation states that exists to look after their own interests? What of its constitution by “we the peoples”, as declared in its founding document?” he asked

The President continued, “Does the theme we have chosen for this assembly have any relevance in real life, and do we want to make the United Nations relevant to all people? Do we want an organization that ensures shared responsibilities for peaceful, equitable and sustainable societies? Or should it remain the place to pass resolutions that are ignored with impunity?”

To this end, President Akufo-Addo stressed the need for the establishment of a world order in which all countries sign up to obey the rules, and for the reform of the UN, where the body will be able to preside over this changed and changing world.

The powerful nations, the President stressed, “must be willing to adapt to the changes to make our world a better place. After all, we all inhabit the same planet, and we all owe the same duty of care to ensure its survival.”

The African Common Position on UN Reform, as expressed in the Ezulwini Consensus, President Akufo-Addo indicated “remains the most comprehensive proposal for reform of the United Nations, particularly of the Security Council. It is time the global community endorsed it to create a modern United Nations fit for purpose in our time.”