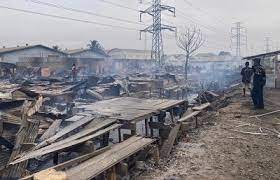 Two persons died in the early hours of Sunday after fire swept through Railway Line, a slum near Circle in Accra.

The fire which started around 3am destroyed several wooden structures.

“The fire fighters managed to salvage the Ghamot Assembly Plant, surrounding buildings and a major part of the slum,” the statement said.

The cause of the fire is yet to be determined.

Meanwhile, the bodies of the deceased have been deposited at the Police Hospital Mortuary for autopsy.