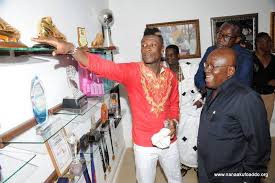 President Nana Addo Dankwa Akufo-Addo has impressed upon Black Stars skipper Asamoah Gyan to rescind his decision to recuse himself from the AFCON 2019 and retire completely from the Senior national team, the Black Stars.

This follows a phone call to Baby Jet as Asamoah Gyan is popularly known, by the president last night during a meeting with stakeholders in football including Dr. Kofi Amoah and head coach of the Black Stars, Akwasi Appiah.

According to the Director of Communications at the Presidency, Eugene Arhin, the president told Mr. Gyan to back down on his decision in the interest of the nation.