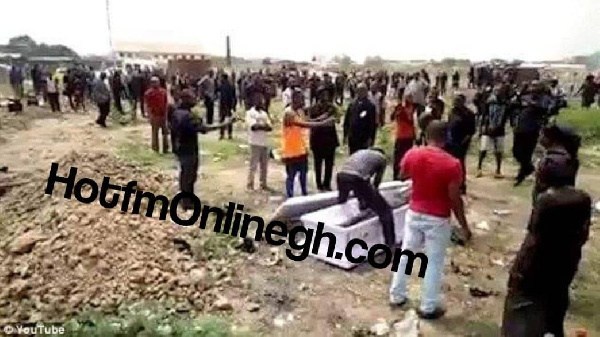 There is shock and some seeming tension at Kwabenya in Accra following the refusal of the Queen Mother of the area, Naa Korkoi Djugbatey II to allow the burial of the corpse of a member of the royal family.

According to BestNewsGH.com sources, the funeral celebrations were in motion and were hitched when it was time to bury, following the strong resistance by the Queen Mother to allow the burial take place.

Naa Korkoi Djugbatey II explaining the rationale behind her decision to oppose the burial of George Ankonu, the deceased, on Accra based Hot Fm said the deceased was banished some years ago from the area.

“George Ankonu was banished some years ago and when he died, as a royal, he had a chain on his wrist which was supposed to be allocated to me, but his wife has refused to do so, so never will I allow his body to be buried here”. She revealed

The Queen Mother added that “the funeral rites were done in Dansoman, but I am the one who gave orders that they should dig his grave for him to be buried here, but since his wife has refused to hand over the chain to me, never will I allow the body to be buried here. They should go and bury him in Dansoman where the funeral rites were performed’’ She added.