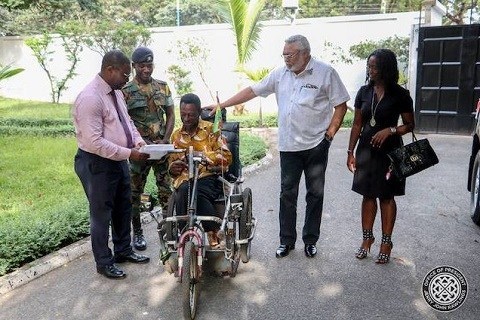 Former President Jerry John Rawlings on Friday brought joy to Emmanuel Ofoe, a physically-challenged street beggar when he donated an undisclosed sum to him to cater for his daughter’s graduation as a hairdresser.

Emmanuel who rides in a rickety custom-made wheelchair with a CD number plate at the Kawukudi junction in Kanda, slipped a note detailing his predicament to the former President in traffic earlier in the week.

The note informed the former President of the challenge he had in supporting his daughter who had completed training as a hairdresser in Ada, to graduate.

Excited after the donation at the former President’s office, Emmanuel expressed gratitude for the generosity and confirmed that the money will go to pay for the graduation fee as well as a decent reception for family and friends after the ceremony.

Emmanuel said he had been ‘stationed’ at Kawukudi for about ten years. He became physically-challenged at the age of six after he fell sick and later developed a neurological side effect which could not be treated.

Former President Rawlings has a warm relationship with hawkers at the Kawukudi junction. One groundnut seller who persistently dropped a little bag of groundnuts into his car now sells minerals and chilled water from a freezer donated by the former President’s office.

Another young lady who was found selling to raise funds to continue her education has been sponsored to go back to school.