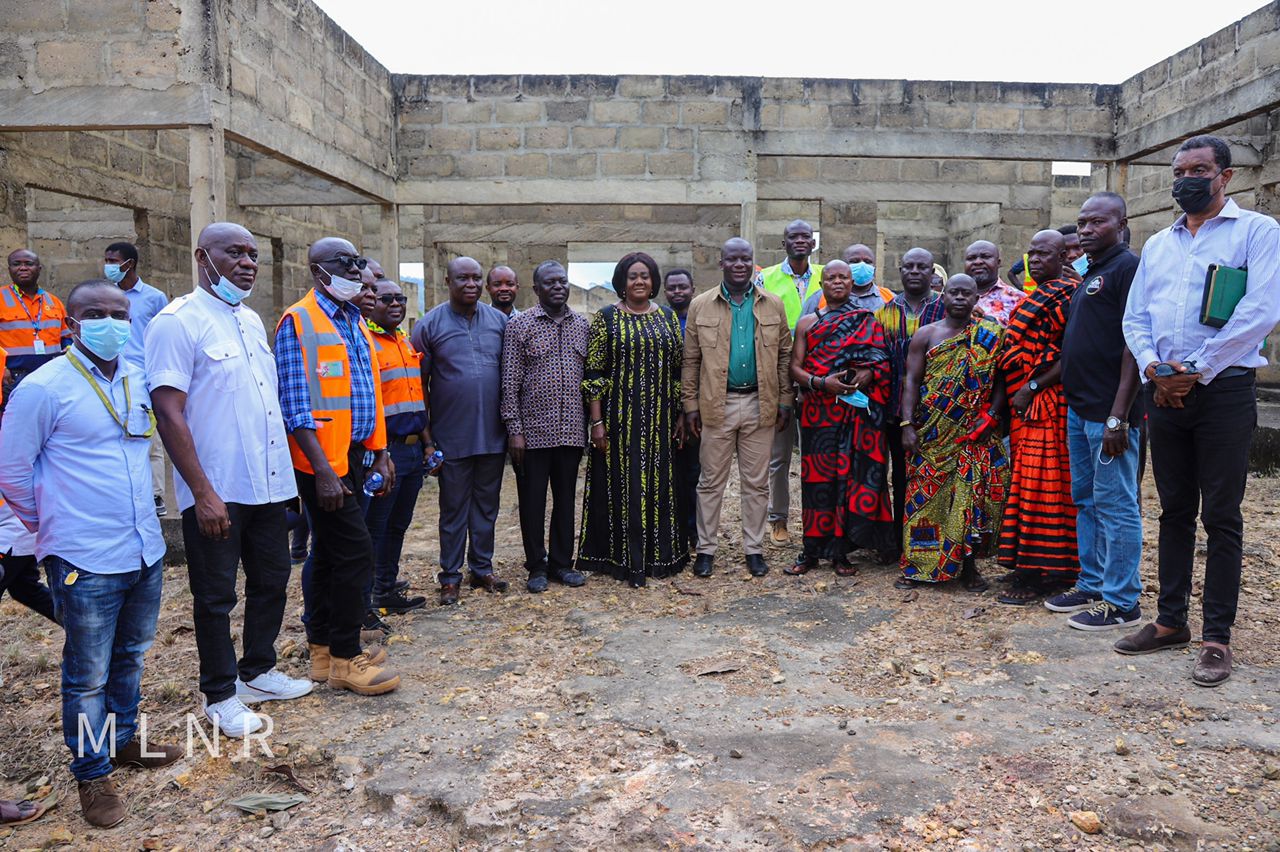 The government has reached an agreement with Future Gold Resources (FGR), the operator of the Bogoso Prestea Mine, to rehabilitate a resettlement community in the area for the displaced residents of Appiatse in the Prestea-Huni Valley Municipality in the Western Region.

It is an emergency measure to provide temporary accommodation for the affected residents while steps are taken to reconstruct their community.

The resettlement community was meant for residents of Dominase who had been affected by the operations of
the FGR.

However, following the explosion that destroyed the Appiatse community on January 20, this year, the government decided to jointly commit resources to
complete the structures at the FGR resettlement site to house the displaced people.

To facilitate the temporary arrangement, the Minister of Lands and Natural Resources, Mr Samuel Abu Jinapor, led a multi-stakeholder team to take inventory of the structures at the resettlement site Monday.

The team was made up of members of the Appiatse Reconstruction Committee, planners, engineers and
utility service providers.

The resettlement community has 112 structures, 76 of which were at the roofing level.

The minister explained that 78 of the structures
would be roofed with iron sheets and fixed with doors
and windows to accommodate the over 800 displaced residents of Appiatse.

He added that Tropical Cable and Conductor Limited, a leading producer of cables in the country, had offered to provide cables free of charge to support the rehabilitation work at the resettlement site.

Mr Jinapor added that the government was working closely with the FGR to mobilise the needed resources to complete the structures as a matter of urgency.

Subsequently, he directed the ForestryCommission in the Western Region to mobilise wood in the region
for the roofing work.

Mr Jinapor assured the chiefs and the people of Appiatse that in about a month’s time, they would move to the temporary community.

He, however, urged them to be prepared to vacate the area for the intended purpose when the time was
up.

“I want to let the people of Appiatse know that this place is not their property. It is a temporary measure to
accommodate you while we put up the Appiatse community. When the time is up for you to move to your permanent place, do not
resist,” he said.

The Chairman of the Appiatse Reconstruction Committee and a Deputy Lands and Natural Resources Minister, Mr Benito Owusu-Bio, assured the minister that work on the resettlement community would begin
next Monday, “and in 30 days’ time, everybody will
have a place to sleep”

The Member of Parliament for Prestea-Huni Valley, Mr Robert Wisdom Cudjoe, urged the displaced residents of
Appiatse to cope with conditions at the
temporary accommodation until permanent structures
were put up.

The mood of the people was a mix of desperation, anxiety and uncertainty, as they recounted their losses and wondered how they would make ends meet.

Some of the displaced residents called for a road map for the restoration of their livelihoods.

They expressed general concern about the government’s plans for those who lost their properties or suffered disability as a result of the explosion.

At least 13 people died and many others sustained injuries when a truck carrying explosives from the Maxam Ghana Limited to the Chirano Gold Mines Limited through a subcontractor, the Joyderk Co. Ltd, exploded.