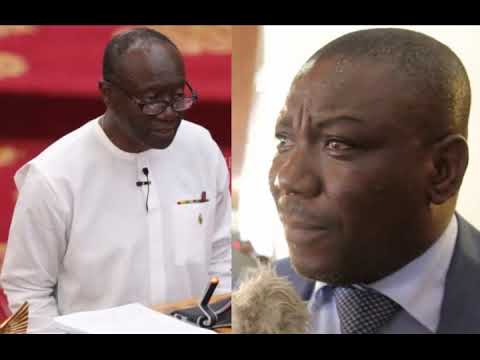 The Member of Parliament (MP) for Bolgatanga Central, Mr Isaac Adongo, has warned that government’s appetite for loans will cripple the country’s future and saddle generations yet unborn with debt.

According to him, government borrows to finance consumption instead of capital investment.

Speaking at a forum organised by the Coalition for Restoration, under the theme ‘The State of the Ghanaian Economy: Myths and Truth’, he described the government as engaging in inconsiderate borrowing and wastefulness.

It is estimated that this might not necessarily be a result of fresh borrowings, but rather interest calculations on the borrowing, as well as the cedi’s depreciation during that period.

The rate of debt accumulation stood at 12% in 2018, excluding the banking sector clean-up, the lowest since 2013.

Mr Adongo said, “In 2018, we went to borrow $750 million, and only $119 million was spent on capital expenditure and $631 million on consumption. Our children will have to pay for this, and they have nothing to show for it.”

Citing the recent $3 billion government Eurobond, which was oversubscribed to the tune of $21 billion, the Bolgatanga Central MP said it holds no investment potential as $2 billion of the bond would go into financing the 2019 budget and the rest into corruption.

“The country you left that was in safe hands is about to enter the international lottery. The country at this point in time is on crossroads. We are confronted with a very severe fiscal environment that is creating a quagmire for us.

“The IMF at a point got fed up with us. We had come to a point where we have left the IMF without achieving the objectives of the IMF programme. As a matter of fact, the IMF at a point got tired of us… The risk of it all is that the managers of the economy do not seem to know where we are, and that is a bigger problem,” he stated.

He also urged the government to implement the recommendations of the International Monetary Fund.

Mr Adongo asserted that the Bank of Ghana (BoG) used about $1 billion of the country’s reserves to support the cedi in the first three months of the year.

According to him, data from the central bank indicated that $700 million was used between January and February, with an additional $300 million added in March.

He said, “Data released by the BoG last week indicated that Ghana’s net international reserves at the end of 2018 was $3.8 billion, which declined to about $3.1 billion by the end of February 2019.

“This means that the BoG had pumped $700m of our hard-earned net international reserves to stabilise the cedi,” he said.

Mr Adongo added that some $1.4 billion of reserves were used to support the cedi between 2017 and February this year, describing the action as a reckless use of the country’s reserves.

Mr Adongo belittled the much-touted banking sector reforms by the Bank of Ghana, saying the supposed reforms, in the manner they were carried out, were not necessary.

He said the BoG could have supported the banks instead of collapsing them.

He said when the NDC wanted to introduce some sanity in the banking sector, they introduced a GH¢230 million minimum capital.

“We, however, agreed that not all banks need the same capital,” Adongo recounted.

He said after setting the GH¢230 million base, they agreed to work with the individual banks to determine the level of risk and then determine their minimum capital.

He said that was done so Ghana’s banking sector could have small and big banks “operate in a risk-free environment”.

According to him, when the NPP took over, all they were determined to do was to collapse the struggling banks, adding that “they introduced a minimum capital of GH¢400 million, and they could not wait for the deadline to come”.

He added that the constant reminder of the deadline caused some panic withdrawals, which further weakened struggling banks.

He estimates that by the end of 2019, Ghana would have spent GH₵20.46 billion “just to collapse the banks”.