Some trucks carrying cocoa were involved in an accident at Ofankor Barrier causing a serious vehicular traffic on the Pokuase-Ofankor stretch Friday. The police has since moved in to control traffic on the stretch. The accident has resulted in a heavy vehicular traffic, impeding movement from the Ofankor-Pokuasi and Pokuasi-Ofankor stretch. But for the intervention […]

Reports have it that the Ofankor residence of the embattled landlord, Stephen Nana Kankam who shot and killed his tenant has been burnt by some irate youth of the area. The landlord who is currently in police custody was said to have shot and killed 31 year old Benjamin Okyere, popularly known as Kobby for […] 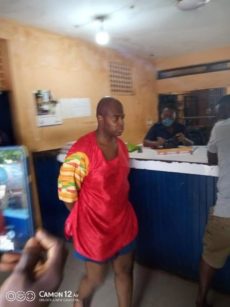 A landlord who shot and killed his tenant at Ofankor in the Ga East Municipality of the Greater Accra Region has been arrested by the police. The landlord, Nana Kankam is said to have opened fire on the young tenant, who has been described as a promising up and coming musician, for failing to pack […]