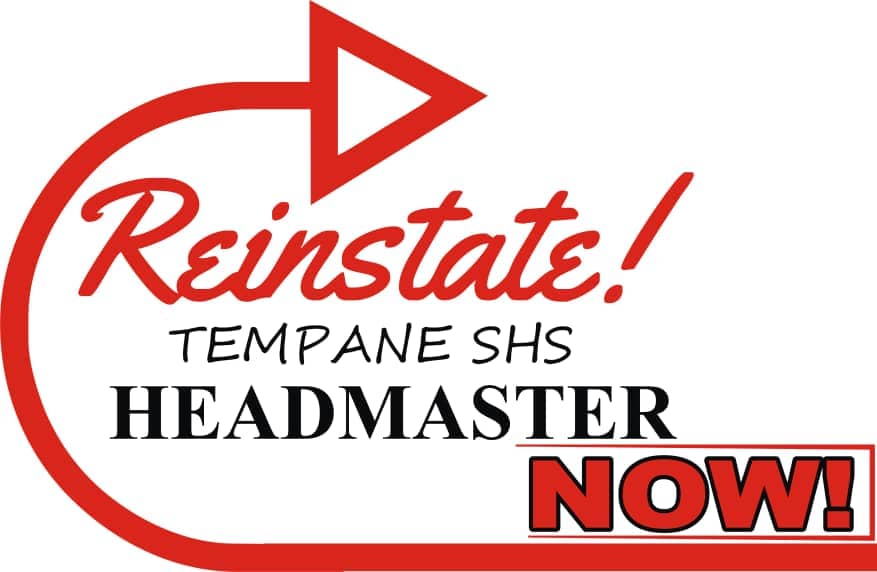 A group known as the concerned youth of Kusaug kingdom the in Garu/Tempane of the Upper East Region are calling for the immediate reinstatement of the suspended headmaster of the Tempane Senior High School (SHS), Ndego Dominic Amolale before Friday 12th October 2018 or face their wrath.

The group in a statement signed by its convener Adam Abdul Malik, its organizer Akaama Nurudeen and Public Relations Officer Akugri Rashid questioned the basis of the suspension of the headmaster saying ‘’on what confirmed offence did the Ghana Education Service suspend the headmaster.’’

According the group, their checks indicate that the headmaster was away in a meeting with the regional education bosses when the incident occurred and could not have given his consent for the engagement between Mr. Joshua Akamba and the students.

The group described the action of the Ghana education service as reckless and without common sense since the headmaster was not even given a hearing.

‘’We love our kingdom, we love our children progress in education, we believe in the development of the Kusaung kingdom and we are therefore, on this statement calling on the GES to reverse their unscrupulous decision before Friday, 12/10 /2018. Or face our wrath. ‘’ they argued further.

See below, the full and unedited statement of the group as sent to this website.

Our attention has been drawn to a letter from Ghana Education services (GES), dated 05/10/2018 asking the headmaster of the Tempane SHS to handover all the running of the school to the regional director of education pending an investigation over political engagement with some of the school children by the NDC Deputy national organiser, Mr Joshua Hamidu Akamba.

As we welcome the decision to investigate the matter, we disagree with the move by GES to suspend Mr Ndengo Dominic Amolale from running the school as the headmaster until further notice.

We are uncouth and saddened by GES uncircumcised decision to suspend him over something he do not have any knowledge off.

We may not know much about law but common sense tells that the headmaster did not engage in any criminal offence nor willingly breach any law or regulations of GES to be treated with this reckless decision by GES.

We will like to let the public know that, their decision is a deliberate attempt to tarnished the image and the good name of the headmaster and put our institution in a serious panimonia situation.

Our checks from the school reveals that the Headmaster wasn’t in the school when Mr Akamba’s convoy stops at the school premises.

The Headmaster was engaged in an important meeting with the regional GES, the day the incident occurred and was not on campus.

It is also crystal clear and undiluted fact that the school has no fence wall and the road leading to yamb’rago, Basyondae and winda is passing through the school compound, to the girls dormitory, the road is dusty and when road users are normally passing they do produce dust which is a heath hazard to our brothers and sisters in the school.

We must applause the community for their kindness and generosity in providing shelter for some of the students for free.

It is unfortunate that, with all these and many other more challenges facing the school GES couldn’t be in a position to call on government for immediate remedy to the numerous challenges face the school and the health hazards that has been expose to the students.

We do not want to rush into conclusions, but little did we know that GES is a remote controlling institution with babies analysis and must reverse their decision on Mr Ndengo with immediate effect.

In our reservoir wisdom GES lacks the ability to protect human rights and child education in Ghana but rather engaging in a political phantasmagoria and in a haste to draw back academic progress in our milieu, this won’t start from us.

It is sad that, political actors who believe in the law and human rights freedom couldn’t free our children from this hazardous and odoriferous  circumstances but rather in rapid motion to use our own who is helping to improve education standards within us, as an scape goat.

Few questions still to ask GES on this primitive move from them:

Did the headmaster feature in the video? did any teaching or non- teaching staff appear in the video? did the programme take place in the assembly hall or a well organised place to create the impression that, that assembly was sanctioned by school authority? are you aware that students on their own can stop a moving convoy to address them? Since the school is not fence.

On what confirmed offense did GES use to suspend the Headmaster ?

After suspending him what are you investigating and for what purpose?

Was Akamba invited to the school by any of the school authorities to meet the students?

Was the Headmaster on campus the time the convoy stops, it is sad that Hon Joseph Dindiok Kpemka the MP of Garu Tempane who double as deputy minister of justice and the District chief executive of Tempane are still quite and support the malicious action of GES which is drawing the progress of development back in our institution, and putting workers, students and the community members within the district in a chaotic panic.

It is unexpected to us that a hardworking Headmaster who put up his best in transformation the school has just been ask to go home without any tangible reason behind.

We love our kingdom, we love our children progress in education, we believe in the development of the Kusaung kingdom and we are therefore, on this statement calling on the GES to reverse their unscrupulous decision before Friday, 12/10 /2018. Or face our wrath.

We won’t sit down and allow our institutions within us to be collapse due to individual parochial interest which does not have any impact on us.

We strongly condemn the decision of GES with no certain terms and want Mr Ndego Dominic Amolale to be reinstated now.