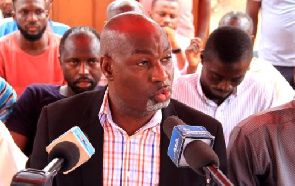 The family of murdered Tiger Eye PI journalist Ahmed Hussein-Suale has called on the government and relevant state institutions to call on the Member of Parliament for Assin Central, Mr Kennedy Agyapong, to refrain from making ill comments about the deceased.

The bereaved family says Mr Agyapong’s constant derogatory comments about the late Ahmed is causing them pain and will respond in equal measure if he does not stop.

The family also believes that the decision by the lawmaker to place a GHS100,000 bounty on the heads of Ahmed’s killers is “deceptive” and an attempt to use diversionary tactics “to change the face of the investigation”.

The spokesperson for the family, Mr Mustapha Iddrisu, who addressed a press conference on Monday, 4 February 2019, said: “We are really offended by this act of Mr Kennedy Agyapong and decry same. It is an insult to the conscience of the family that a man who called for harm to be visited on our son would only turn around a few months down the line, after the call for harm has been overly subscribed to, and say that he is placing a bounty on the heads of those who may have acted on his call and gotten leads thereby to carry the act”.

The family also described as false, the assertion by Mr Agyapong that Ahmed fell out with his boss, Anas Aremeyaw Anas just before his murder.

Additionally, the family condemned the disclosure of the identity of the murdered journalist and incitement of violence against him by Mr Agyapong shortly after the Number 12 documentary by the Anas-led Tiger Eye PI which exposed corruption in football.

The family maintained that “not only did he [Mr Agyapong] ask our beloved son to be harmed at his [Mr Agyapong’s] premises but everywhere”.

Hussein-Suale was shot thrice on Wednesday, 16 January 2019 at Madina, a suburb of Accra while driving home around 10 p.m. His assailants made their getaway on a motorbike.

Shortly after his gruesome murder, world-renowned investigative journalist Anas Aremeyaw Anas pieced together a short video containing an old clip of Mr Agyapong’s incitement of violence against Mr Hussein-Suale after Tiger Eye PI premiered the Number 12 undercover documentary which led to the resignation of Ghana’s FA president, Kwesi Nyantakyi and his subsequent banning for life from all football-related activities by FIFA, for taking bribe.

Mr Agyapong has, however, denied involvement in the murder of the investigator and said he will personally gift GHC100,000 to anybody who provides credible information that will lead to the arrest of the killers.

The Ghana Police Service is investigating the matter.