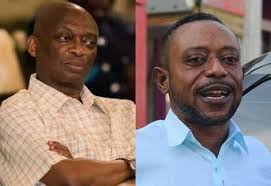 According to him, the failure of Mr. Baako to be specific on the matter during Joy Fm’s flagship current affairs talkshow Newsfile, smacks of one who is afraid to be frank and candid in stating the obvious.

‘’Folks, I’m disappointed that Kweku Baako, Jnr. AKA Bombay,  had no courage to do what he taught many, including Anas, to do, in relation to his banter with “Rev. Prophet” Owusu-Bempah.

Mr. Baako’s generic: “I am advising the politicians who appear to associate with them directly or indirectly . . . they should have the courage to distance themselves from the nonsense that they are perpetrating,” is cowardly!’’ Dr. Apaak wrote.

He added that ‘’Baako knows the relationship between President NADAA and Owusu-Bempah, he should be bold to tell the President, his friend, to denounce and disassociate himself from Owusu-Bempah! He must be bold and specific. Dancing around the obvious is cowardly!’’.