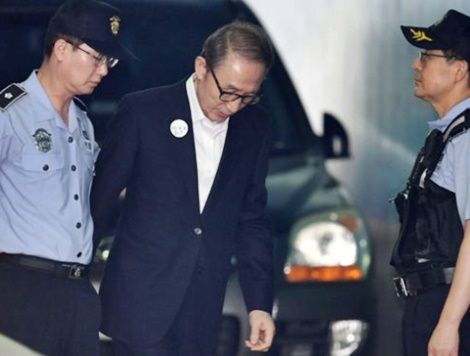 Lee was sentenced in a Seoul court on Friday on charges of bribery, embezzlement and abuse of power. This makes Lee the fourth South Korean former leader to be jailed over corruption, following his successor’s imprisonment in April.

Lee, the president of South Korea from 2008 to 2013, was arrested in March. He denied any wrongdoing and claimed the charges were politically motivated.

During the televised trial, the Seoul District Court ruled that the 76-year-old is the de facto owner of his brother’s company, DAS, which is at the centre of the corruption investigation.

The court found the former leader accepted billions of won from major electronics firm Samsung in return for pardoning its chairman, Lee Kun-hee. The company denies having given the former president the money.

The judge at Seoul Central District Court said “heavy punishment for the accused is inevitable” because of the serious nature of the crimes.

Such actions from the president, the head of state and the leader of the executive branch, can be severely condemned as it does not stop at violating the fairness and integrity of the presidential office, but undermines trust in the entire public office.

Bringing everything into consideration, heavy punishment for the accused is inevitable.