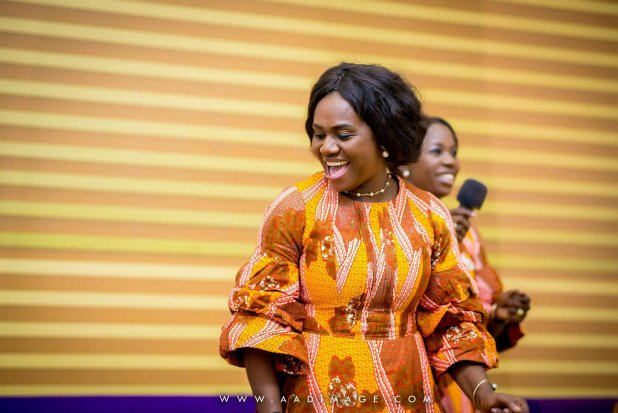 Cynthia Agyare Apeadu is the youngest of the gospel music trio, Daughters of Glorious Jesus.

She is married to a businessman by name Kofi Apeadu and they have been married for the last 21 years.

Mrs. Cynthia Agyare Apeadu also doubles as business women who is into various goods including cooking wares among others and operating her shop from the Nyamekye junction area at the lapaz area in Accra.

Speaking on McBrown’s kitchen on United Television in Accra where appeared as guest, Cynthia said she schooled in Kumasi, the Ashanti Regional Capital from elementary through to O level before venturing into mainstream music through the Resurrection Power and Living Bread Ministries, where she was nurtured by the late Osofo Akwasi Amoako, founder of the church.

Even though she is the youngest of the group comprising herself, her elder sister Edna and their childhood friend, Monica, she is the leader of the group.

She said the group has lined up a series of activities to mark 30 years of their ministry in the gospel music arena.

On what makes them quarrel sometimes, she said “it rarely happens but when it happens, it means one of us changed the dress code for a particular event. Maybe we agreed to wear a particular attire and perform at an event and then before you realize, one of us appears in a different dress, that once in a while is why we quarrel. But once we argue there and then, that’s it” she said.