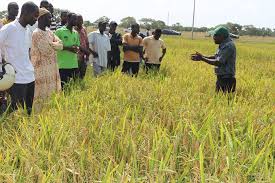 The Savannah Agricultural Research Institute (SARI) of the Council for Scientific and Industrial Research (CSIR) is starving for funds to conduct relevant research to improve agriculture in the country.

This is in spite of the institute’s efforts to access funding from donor organisations.

A principal research scientist with SARI, Dr Roger Kanton disclosed this in an interview with The Finder at Nyankpala in the Northern Region.

Dr Kanton said government’s funding for research must be directed at research institutions such as the CSIR, rather than academic research.

“They have to support research. If we don’t have research, we can’t come out with solutions to these problems. Government pays salaries; that is good. Sometimes they bring projects, but there should be deliberate attempt to give a good portion of the GDP (to research).

“And when they talk about research, they are talking about universities, but relevant research is done by the CSIR. We do adaptive and applied research, but when we talk about money for research, they think it is university research; that is flawed. They should focus on the Council for Scientific and Industrial Research,” he pleaded.

Though much of the research work being currently undertaken by SARI is donor driven, the flow of funds from donor organisations is stifled by government’s policy of ‘Ghana beyond Aid’.

”Most of these current works we are doing is purely donor driven. They (government) promised small, but they don’t even give the small. It’s disheartening. It is our brains we use to bring small projects, but now that we are even talking about ‘Ghana beyond Aid’, things have dwindled significantly. Currently, what we used to get, we have about 75%, roughly speaking, so government should try to be making up for this deficit,” he said.

He stressed the need for policymakers to depend on relevant local-based research rather than adopt and apply research conducted outside the country. He, therefore, appealed to government to provide funding for research institutions in the country to find solutions to the myriad of challenges facing the agricultural sector in the country.

“You can’t go and pick research from outside to work. It doesn’t work like that, but mostly they’ve been picking from abroad. Everything changes. Socially, we are not the same; politically, we are not the same. Research must be local based. You use local talent to do it; it will stand the test of time. Now that we are even talking about climate change and climate variability, that is key. So we are appealing to government to give us money,” he appealed.

To realise this, Dr Kanton suggests that the government levies agrarian products that are being exported outside the country. He says if as low as GH¢0.5 is levied on every kilo of exported products, the government will be able to mobilise enough resources to fund research in the country.

“I think government can do that by levying products. They can put some small levies on maize we release so that when we are exporting them they take those things (levies) and support research. When somebody is exporting groundnuts, take a percentage, add something small and give it to a dedicated fund called Agricultural Research Fund. You can put GH¢0.5 on a kilo, something that if we are looking at a lot of tonnages, it will make a lot of sense. Just like we have VAT, when you go to buy things, you can’t avoid it. We have National Health Insurance. So this can be targeted at exports of agrarian products outside of the country,” he explained.