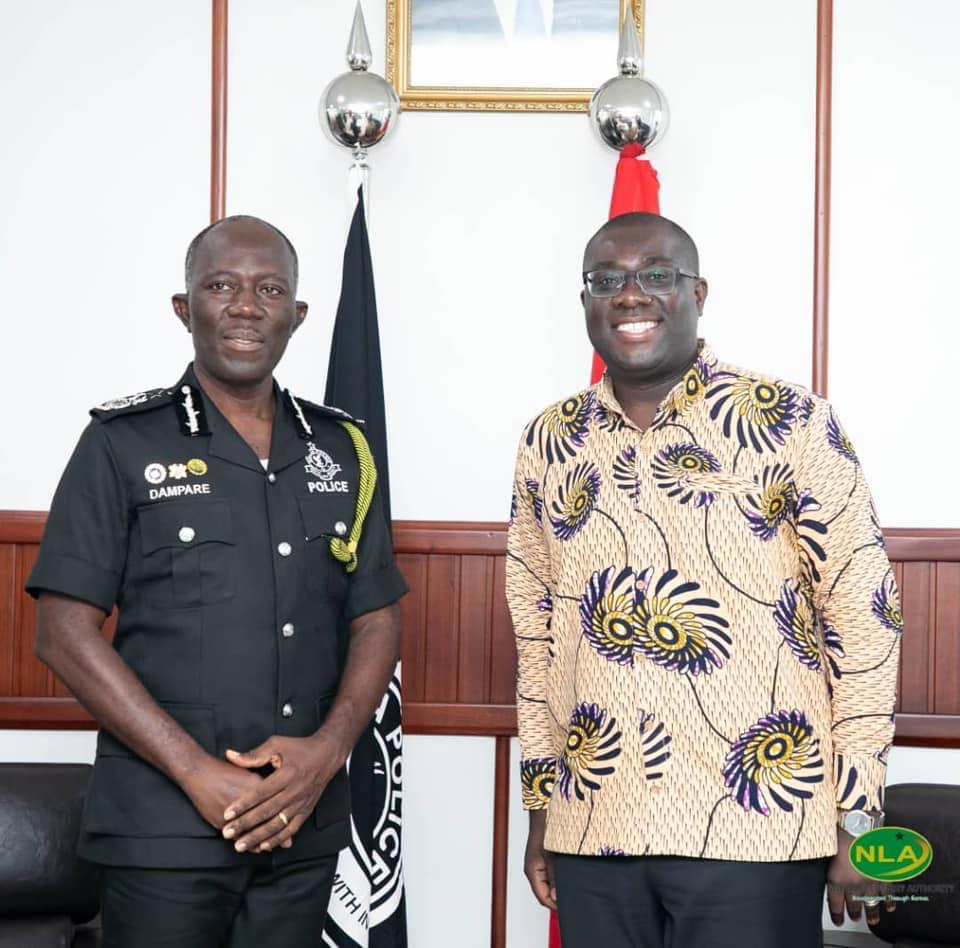 The Director-General of the National Lottery Authority, Mr. Sammi Awuku today Tuesday November 9, 2021 led a delegation from the Authority to pay a courtesy call on the Inspector-General of Police.

The visit afforded the two distinguished leaders to discuss areas of mutual benefit and interest and to identify areas of collaboration that would result in outcomes that will propel the two institutions.

More importantly, the erudite and astute NLA Director-General used the opportunity to call for support from the police administration to clamp down on illegal lotto activities in the country. 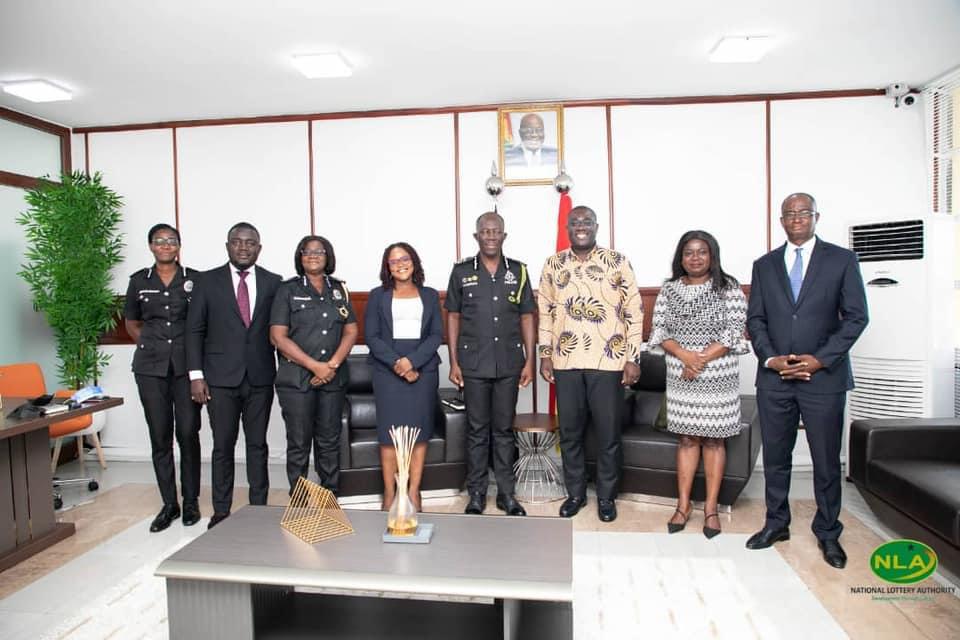 Held in an atmosphere of candour, the two leaders during discussions expressed the desire to collaborate and work for the betterment of their respective institutions and the country as a whole.

Coincidentally, Both Mr. Awuku and the Inspector-General, Dr. George Akuffo-Dampare seems to be enjoying enormous support, praise and admiration from Ghanaians for their leadership style in their respective organisations. 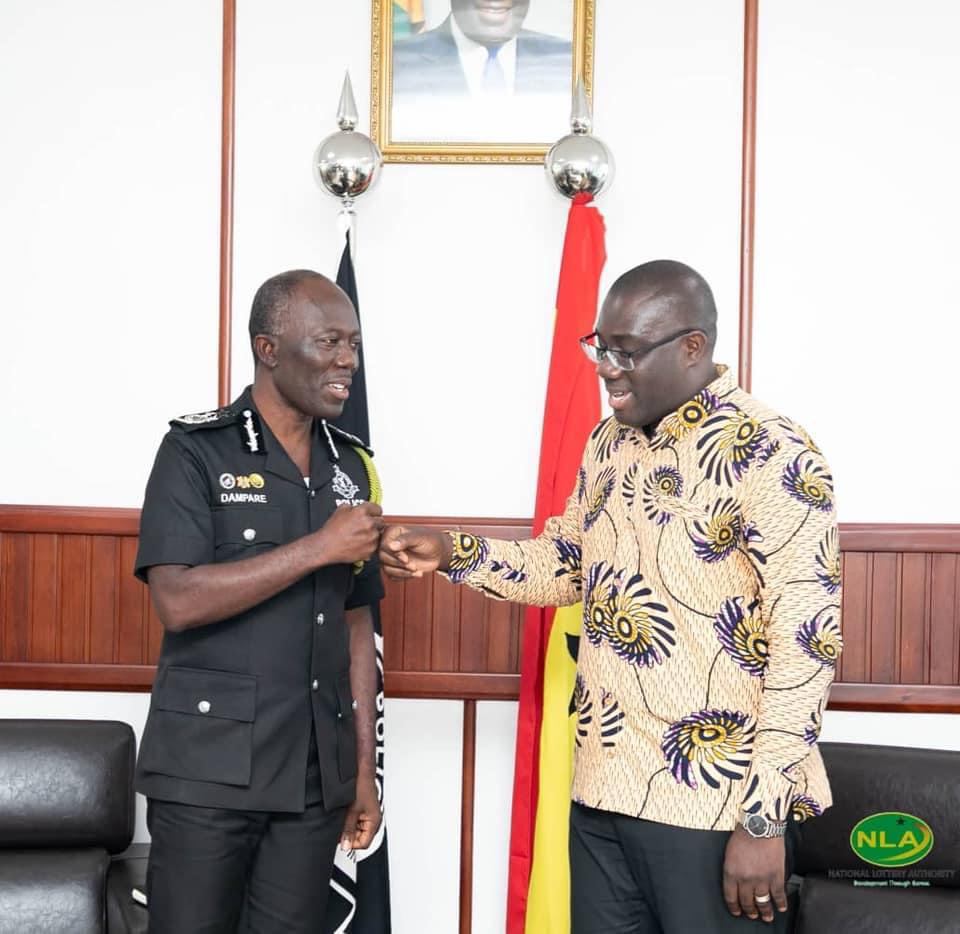 On the part of the IGP, he has been described by Ghanaians as the right man for the job based on his approach to administering policing in the country. He earned praise from President Akufo-Addo who believes the new IGP has what it takes to transform the police service.

On the part of Mr. Awuku, he has earned commendation and admiration from the public premised on his work ethic and leadership style since assuming the role of Director-General of the NLA. Indeed, a Board Member of the Authority, Madam Joana Frances Adda who could not hide her admiration for the quintessential, charismatic and young Director-General wrote elaborately about him.

Read below, her write-up on Mr. Sammi Awuku

To a results-oriented CEO, motivation is a vital strategy in getting staff to buy into corporate agenda, change behavior, improve efficiency and most importantly build friendly relationship.  Motivation comes in different forms and the most embraced by workers are salary increments, promotions,  good working environment, social intervention eg. allowances/enhancement of same, etc. etc. etc.

Another critical, yet over-looked, strategy is carrying your staff along with you, especially when introducing drastic and ‘alien’ reforms, to say, “the old order changeth, yielding place to new” is exactly what the young, wise and smart  Mr. Samuel Awuku, the Director-General of National Lotteries Authority (NLA), has adopted.

(1) Leadership by example; walking his talk.  He tells his staff, 8am you start work and 5pm you end.   7:30am, Sammy Awuku is in the office and leaves office after 5pm.  Pay a surprise visit to any NLA office nationwide at 8am,  and they would be too busy to notice a visitor.

(2) Moving to Site:  Visiting offices, sometimes unannounced,  knowing their challenges and sharing knowledge makes staff feel they are treasured and part of the team.

Staff of NLA demonstrated their readiness to work tirelessly and make quality service delivery their goal at a social nite Mr. Samuel Awuku organized on Friday 29th October, 2021 after a hard day’s work.

As I sat enjoying the good music, I could see genuine happiness from the body language of staff.  They jumped, laughed, danced and teased each other. I could not help but to join in the dancing.

What else can we party faithfuls say but to thank His Excellency for appointing Mr Samuel AWUKU as DG and to wish him God’s direction and protection in his herculean task.