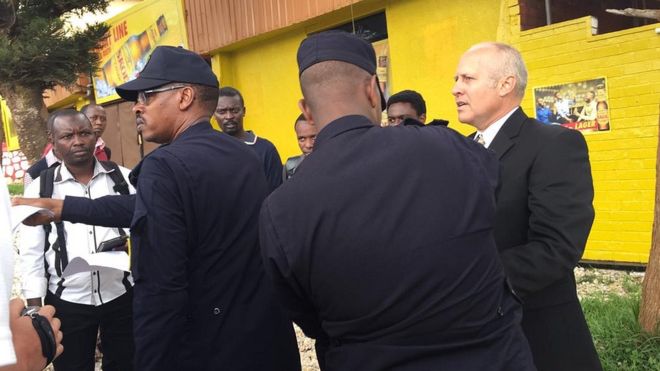 An American preacher who was arrested on Monday in Rwanda for holding an “illegal meeting with journalists” has been deported, New Times of Rwanda newspaper reports.

Rwandan Director General for Immigration and Emigration Regis Gatarayiha is quoted by paper as saying evangelist Gregg Schoof was removed from the country for being a “prohibited immigrant” adding that he was “involved in activities that cause public disorder”.

His [work] permit had expired since 6 July 2019. His extended stay had been accorded to him on his request to prepare to leave but his involvement in activities that cause public disorder were not among the allowed preparations to leave the country.”

The preacher had been due to criticise the Rwandan government for shutting down his radio station and his church.

The Amazing Grace radio station was banned last year after it broadcast a sermon that described women as “evil”.

Mr Schoof’ disputes this saying in a statement on Monday that the preacher on his station had used woman as a biblical metaphor for a church, so he said, the sermon was about “a bad church” not women.

His church was closed in February, among hundreds of others, for failing to comply with building regulations “and for noise pollution”.

In May, the preacher lost an appeal against the government’s media regulator to get his station to be reopened leading him to question the extent of freedom of expression in Rwanda.

In his Monday statement he accused the government of trying to send people to hell by closing churches, teaching evolution in school and promoting abortion.

Mr Schoof and his family have been living in Rwanda since 2003.

“I did not come here to fight the government. I came to preach the gospel. I care nothing about politics. Nor do I care who is president or what party is in power,” his statement said.

“But this government has taken a stand against God with its heathen practices. I hope Christians will do their lawful part in all this and simply do what is right and help fix these problems.”