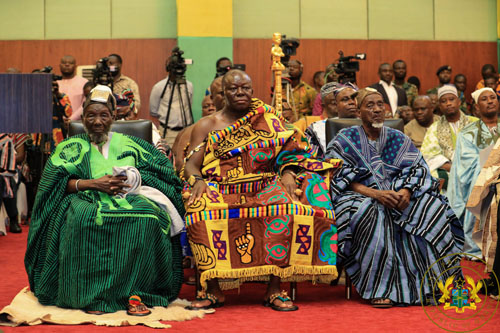 All Dagombas, especially the Abudus and Andanis, have been urged to accord the due recognition and respect to Yoo Naa of Savelugu, Abubakari Mahama, the new Yaa-Naa, as they chart a new course for lasting peace in Dagbon.

Congratulating Alhaji Abukari Mahama on his selection as the new Yaa-Naa of Dagbon, the Committee of Eminent Chiefs, chaired by His Majesty Otumfuo Osei Tutu II, Asantehene, assured both families that upon completion of all customs and traditions in the enskinment of the new Ya-Naa, the committee “will engage the Yaa-Naa in resolving all outstanding issues”.

Funerals of princes and elders of Dagbon

These include all the funerals of princes and elders of Dagbon, as well as enskinment of both regents of Na Mahamadu Abdulai IV and Na Yakubu Andani II, and other regents.

The Dagbon Stool had remained unoccupied for some 17 years after a long-drawn feud between the Abudu and Andani families when Yaa-Naa Yakubu Andani was murdered in March 2002.

“We thank the accredited elders (kingmakers) of Dagbon, led by the Kuga-Na, for having gone by the time-tested customs and traditions in the process of selecting the new Ya-Naa,” a statement issued by the committee added.

The committee expressed its heartfelt thanks to the Abudu and Andani royal families, especially the regents – Bolin-Lana Abdulai Mahamadu and Kampakuya-Naa Andani Yakubu Abdulai – for their understanding and co-operation in the performance of the funerals of both Na-Mahamadu Abdulai IV and Na Yakubu Andani II.

The new Yaa-Naa, Abubakari Mahama II, has travelled to Zohe from Katin after he began processes for his full enskinment.

He is expected to stay at Zohe for three days before moving to the Mba Dugu palace to complete the enskinment process.

Hundreds of residents lined up to see the Yaa-Naa’s procession. There is also a heavy security presence to prevent any violence.

President confident of order in Dagbon

President Nana Akufo-Addo congratulated the new Yaa-Naa, and expressed optimism that the regent would work to restore lasting peace and bring prosperity to the Dagbon State.

“At long last, the people of Dagbon have, by the grace of God, a new Yaa-Naa, bringing to an end decades of division, strife and tension in Dagbon.

“I send warmest congratulations to Yoo-Naa, the Savelugu Naa, Abubakari Mahama, on his election by the time-hallowed customary process on Friday, 18th January, 2019, as the new Yaa-Naa of Dagbon, following the completion of the final funeral rites of the late Yaa-Naa Yakubu Andani II, on Friday, 18th January, 2019,” the President said in a statement.

According to the President, the people of Dagbon, especially the Andani and Abudu royal families, are to be congratulated for this achievement and for ensuring that the funerals of Yaa-Naa Mahamadu Abdulai IV and Yaa-Naa Yakubu Andani II were held and concluded peacefully, bringing us to this very happy day.

“I am confident that the new Yaa-Naa will steer ably the affairs of Dagbon, move swiftly to place the Kampakuya Na and the Bolin Lana in their rightful positions in the kingdom and help bring lasting peace and unity to one of the most ancient traditional states of our nation.

“He is an experienced and mature man, a man who loves his people, and a man who will work to ensure that Dagbon prospers and offers opportunities for its youth to enhance their lives in normalcy and security,” President Nana Akufo-Addo said.

He expressed appreciation to the Committee of Eminent Chiefs, chaired by the Asantehene, Otumfuo Osei Tutu II, together with the Overlord of Mamprugu, the Nayiri, Naa Bohugu Abdulai Mahami Sheriga, and the Overlord of the Gonja Kingdom, the Yagbonwura, Tuntumba Boresa Sulemana Jakpa, for “working so hard and with such determination to help us realise this memorable occasion”.

“I salute their high sense of statesmanship and patriotism,” the President said.

To the Kampakuya Naa, Yakubu Abdulai Andani, and the Bolin-Lana, Abdulai Mahamadu, the President lauded the constructive roles they played towards ensuring the completion of the funerals of their respective fathers, and for their subsequent words of acceptance and declaration of loyalty to the new Yaa-Naa.

“It is the expectation of the people of Dagbon that, as the eldest sons of two most recent Ya-Naas, they will help the new Yaa-Naa lay the basis for the rapid development of Dagbon in unity and solidarity,” President Akufo-Addo stated.

He further applauded the security agencies for “exhibiting professionalism in guaranteeing, despite one or two regrettable incidents, the peace of the area throughout this difficult period”.

“Like the overwhelming majority of Ghanaians, I am delighted about today, and I look forward eagerly to visiting Yendi soon to congratulate the new Yaa-Naa in person, once he is outdoored.

“I assure him (Yaa-Naa Mahama) and the entire people of Dagbon of my government’s wholehearted support in helping to restore Dagbon to its former glory and greatness.”

Former President John Dramani Mahama expressed his excitement over the peace that has finally been restored at Dagbon following the people’s acceptance of the new Yaa-Naa.

According to him, this is an effort by successive governments worth celebrating after years of the protracted disputes.

“So happy for this day, and we should be eternally grateful to Allah that Dagbon has finally seen peace.

“After many years of hard work, negotiations, long meetings, disagreements, traditional considerations and agreements, we celebrate the efforts of successive governments for this day.

“Working together, the Eminent Chiefs appointed to help resolve the very challenging Dagbon chieftaincy dispute, the Andani and Abudu royal families and the people of Ghana, this major success has been achieved and we have a new Yaa-Naa.

“Congratulations to the two royal families and the Eminent Chiefs, led by Otumfuo Osei Tutu II.

“Congratulations to Yaa-Naa Abukari Mahama II, and I pray for greater wisdom for you as you begin your reign. Let’s continue to work together for lasting peace,” former President Mahama said.

The final funeral rites of Yaa-Naa Yakubu Andani II ended peacefully at the forecourt of the Gbewaa Palace in Yendi Friday. The ceremony was preceded by some sacrifices and almsgiving (Sara malbu).

There was also the recitation of the Holy Quran and special prayers led by the Yan-Limam, Shehu Yussif Yakubu Gomda, for the soul of the late Dagbon overlord and his predecessors, and for lasting harmony in Dagbon and the country.

The event was attended by chiefs, some custodians of Dagbon tradition, royal family members, Muslim clerics and sympathisers.

The Kampakuya Naa, Abdulai Andani, did not attend the ceremony for the reason that, traditionally, a regent does not attend events on Fridays.

Also present were the Supervising High Court judge in Tamale, Justice Richard M. Kogyapwah; the Vicar General of the Yendi Catholic Diocese, Rev Fr David Kajal; some members of the Yendi Peace Centre and other guests.