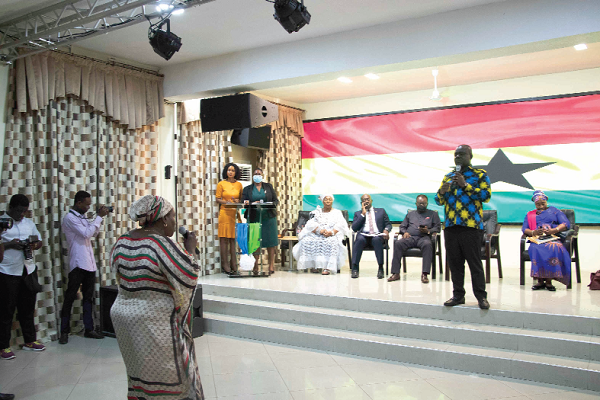 Traders have called on the government to take urgent steps to reduce fuel prices to mitigate the economic hardships they currently face.

According to the traders, the continued increment in fuel prices had increased the cost of transporting foodstuffs from the farm gates in the rural areas to urban markets.

They also said middlemen who played an active role in carting foodstuffs to urban markets had taken advantage of the fuel prices to increase the cost of their services.

In the circumstance, they said, traders were left with no option but to transfer the transportation cost to the final consumer.

The trading community made the call at an interactive forum held by the Cabinet Ministerial Committee set up by the President to look into the causes of the high cost of foodstuffs on the market in Accra yesterday.

Although the ministerial committee is engaging the citizenry on the impact of the government’s economic measures on various sectors, the focus of yesterday’s engagement was on the high cost of foodstuffs on the market.

The forum brought together traders in yam, maize, fruits and tomatoes, as well as transport operators.

During the opening session, the committee made a presentation that indicated that visits to 10 markets over the last two weeks had shown that the wholesale price of tomatoes at farm gates in the rural areas was about GH¢300 but it skyrocketed to GH¢900 on urban markets.

For yam, it said wholesale prices ranged between GH¢500 and GH¢1,500, depending on the location, but increased by almost 100 per cent on urban markets, particularly Agbogbloshie.

However, the traders maintained that high fuel prices were largely responsible for the widening differences in the prices at the farm gate and those on urban markets.

A tomato trader, Vivian Smith, said contrary to claims that tomatoes abound in the country, there was limited supply of tomatoes, forcing them to go to Burkina Faso, Mali and other countries.

She said high exchange rates and transport cost forced the prices of tomatoes up on the market, since traders needed to sell at a good price to remain in business.

Apart from the high transport cost, Ms Smith said, other charges, including the cost of loading and offloading, as well as cost of boxes, added to the final price of tomatoes on the market.

“It is all because of fuel prices. If they are reduced, food prices will go down,” he said.

For his part, the Secretary of the Ghana National Cargo Transport Association, Alhaji Alhassan Mohammed, said the high cost drivers charged for carting foodstuffs was because of the increment in fuel prices.

Giving some specifics, he indicated that the cost of transporting a bag of pepper from Agogo to Accra increased from GH¢12 at the beginning of the year to GH¢20.

Assurances
Dr Akoto assured the traders and players in the food value chain that their concerns would be presented at the next Cabinet meeting on Thursday and expressed the government’s commitment to work with stakeholders to ensure that there was enough foodstuffs across the country.

Mr Oppong Nkrumah, for his part, noted that despite the high prices of fuel on the global market, the government was committed to creating measures to mitigate the burden on businesses and the economy.