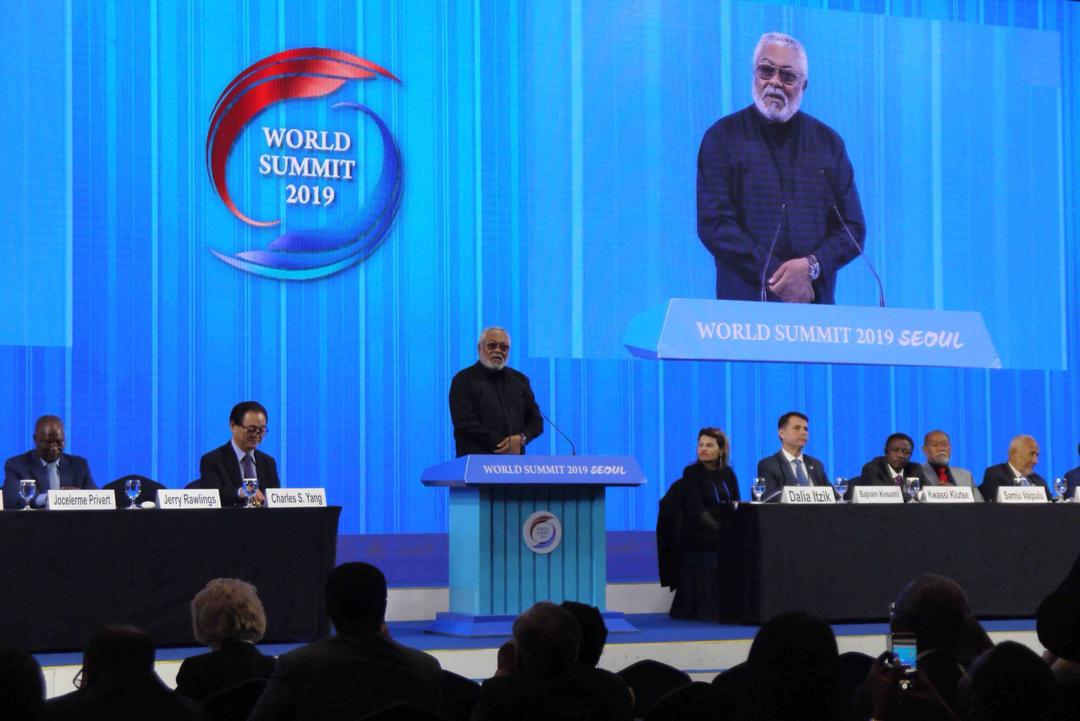 Former President Jerry John Rawlings has called for a culture of global political accountability to stem the tide of impunity being exhibited by some states.

He said the key to any disparaged group rallying together for an honest shared existence is through transparency of leadership and accountability for all.

Flt Lt Rawlings made the call when he delivered a keynote address at the World Summit of the Universal Peace Federation (UPF) in Seoul, South Korea last Saturday.

The former President also called on the United States to find a better way of propagating the cause of justice or democracy, stating there was a time when America had the image of a liberator country, but recently her approach is undoing that positive image and portraying her as an aggressor.

Citing goals 16 and 17 of the United Nations Sustainable Development Goals, the former President said the goals urge the promotion of sustainable development,  provision of access to justice and the building of effective accountable institutions.

Building the partnership goals, the former President noted, will be impossible if “we do not confront the challenges of the current global political climate and the dearth of international political morality”.

“How do we engender peace and security when some of the very forces that seek to impose their moral compass on us are suffering a serious decline in international political morality?” former President Rawlings questioned.

Former President Rawlings said Israel’s actions in Palestine, against Iran and Syria as well as Saudi Arabia’s brazen actions against the Shites and in Yemen is a clear misuse and abuse of the relationship with the United States.

“The cruelty that the Yemenis are being subjected to would have been characterized as ethnic cleansing if it had been perpetrated by other war-mongering parties,” the former President stated.

Flt Lt Rawlings said when the Cold War ended the world was made to believe the tensions prior to the thaw will give way to genuine piece, global prosperity and a shared vision for humanity, but never-ending conflicts, many involving the same players we assumed would be leaders of conscience, have rather characterised the period.

The role of the United Nations also came under scrutiny when the former President stated that the body formed as a direct response to the most violent conflict in human history has been incapable of stopping even the most basic negatives of key member states.

The time, the former President said, had come for the interest of the voiceless, beat-upon and pillaged nations to be heard. “It is time we draw a hard line in the sand and make our numbers count,” he said.

Touching on the recent decisions by the International Criminal Court (ICC) on Ivory Coast’s Laurent Gbagbo, the former Ghanaian leader described as bizarre and shameless the decision by the prosecutor to appeal the case after “no credible evidence” had been found.

“Bizarrely, the ICC prosecutor who clearly is operating on the dictates of the embarrassed powers-that-be, decides to shamelessly appeal and once again curtail Gbagbo’s freedom. How can you package him to another country on some twisted bail terms that effectively makes him prisoner and prevents his freedom of international travel, including going back to his own country?” Mr. Rawlings asked.

Former President Rawlings also drew attention to the situation in Cameroun and wondered why France, the United States, the United Kingdom and other allies seemed oblivious to the horrendous situation unfolding in the African country.

The world will see peace “if we learn to speak up as a people. The time to stop hiding behind economic and political vulnerabilities is now. A select few cannot afford to cower the majority into submission if they rise up to speak to the truth and defend the ideals of true accountability to all the peoples of the world,” the former President stated.