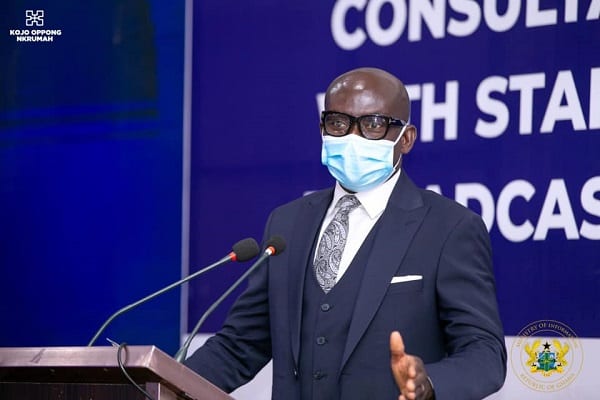 The Attorney-General and Minister of Justice, Mr Godfred Yeboah Dame, says a new bill in the offing, the Conduct of Public Officers Bill, will give a more consequential effect to Chapter 24 of the 1992 Constitution.

“A careful examination of Chapter 24 will disclose that the Constitution emphasises on conflict of interest as opposed to subtle, complex and perhaps more inimical forms of unethical behaviour,” the Attorney-General said.

“The need to lay down a set of far-reaching and, perhaps, a more fit for purpose set of regulations for the conduct of public officers cannot be gainsaid.

“This Bill seeks to strengthen the role of the Commission on Human Rights and Administrative Justice (CHRAJ) in the investigation of allegations of contravention of, or non-compliance with, the Code of Conduct for Public Officers, including conflict of interest, non-declaration of assets, and illicit enrichment,” the Attorney-General stated.

“It is my respectful view that the Bill will be a huge shot in the arm of the fight against corruption in our dear country,” he said.

The bill will also address issues regarding financial portfolios held by public officers before assuming public office, such as links to family businesses; professional practices, property, investments/shareholdings and other assets, self-dealing, partiality in the performance of duties, use of public or confidential information to further private interest, improper enrichment and care of public property.

Again, he said, the Bill sought to domesticate two anti-corruption conventions ratified by Parliament on December 14, 2005, namely, the United Nations Convention against Corruption and the African Union Convention on Preventing and Combating Corruption, and to provide for other purposes.

“The provisions of these two Conventions provide the international template for anti-corruption in the legislation of member states.

“The Bill will serve the purpose of legislations in other jurisdictions such as the United States Ethics in Government Act of 1978 and Public Officers Ethics Act of Kenya,” he said.

The Bill, Mr Dame pointed out, would also seek to address matters relating to sexual harassment and provide a gamut of stringent administrative measures and sanctions to deal with violations of the law, ranging from a bar against holding public office to penal measures when found guilty of such harassments.

The Conduct of Public Officers Bill also addresses the conditions under which a person is qualified or disqualified from holding public office; the declaration of assets and liabilities in accordance with article 286 of the Constitution; the Code of Conduct for adherence to guiding principles by public officers and the prohibition from acting in a manner in which the personal interest of a public officer conflicts or is likely to conflict with the official functions of the public officer.

Other objects of the Bill are the conditions under which legal proceedings against public officers can be carried out and also spell out administrative procedures, the Oath of Office, sanctions and regulatory matters.

Mr Dame stated that the passage of the Bill into law should not prevent other public institutions from further improving accountability and ethical conduct at the work place by enacting specific codes of discipline to meet the peculiar demands of their establishments.

It is noted that, for instance, the United Kingdom’s Civil Service has, pursuant to the provisions of the U.K. Constitutional and Governance Act of 2010, enacted the Civil Service Code to further regulate their civil servants, he said.

“I must state that if this Bill is passed into law, it will, in consequence, repeal the Public Officers Act, 1962 (Act 114) and the Public Officers Holders (Declaration of Assets and Disqualification) Act, 1998 (Act 550) and provide the desired legal framework to identify and manage conflict of interest scenarios pertaining to a public officer, so as to have one global legislation for dealing with, among many other things, matters contained in those legislations,” he said.

The Attorney-General said from time immemorial, the nation had been in desperate need of a comprehensive body of ethics to regulate the conduct of men and women vested with public trust.

“It is correct to say that unethical behaviour in public office has been a major cause of political instability in Ghana. Such conduct has been pervasive throughout Ghana’s political and administrative systems since independence in 1957,” he said.

The Attorney-General and Minister of Justice expressed the hope that the process of enacting the Bill into law, commencing with the stakeholder engagement, would be rapid and culminated in the enactment of a law. Combating Corruption, and to provide for other purposes.

“The provisions of these two Conventions provide the international template for anti-corruption in the legislation of member states.

“The Bill will serve the purpose of legislations in other jurisdictions such as the United States Ethics in Government Act of 1978 and Public Officers Ethics Act of Kenya,” he said.