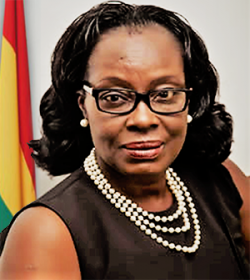 A group calling itself the Coalition of NPP Foot soldiers against corruption have given the Attorney General and Minister of Justice, Gloria Akuffo an ultimatum to commence the prosecution of former appointees in the previous National Democratic Congress (NDC) administration or leave her office.

‘’We have come to realize that the Attorney General, Madam Gloria Akuffo and her deputies are either not interested in prosecuting these landmark cases or they lack the competence to do so.’’ they said in a statement issued a while ago under the hand of the convener, Samuel Kwarteng and a few other executives.

They say the lackluster attitude of the Attorney General and her deputies is giving them headaches and are therefore impressing upon her to vacate her post if she feels the task of prosecuting former appointees who have been cited in various corruption cases is a daunting task and one that she cannot handle.

They said ‘’we are using this medium to appeal to the President of the Republic, Nana Addo Dankwa Akufo-Addo to, as a matter of urgency, order the Attorney General to live up to expectations or sack her and her lieutenants.’’

See below, the unedited press release issued by the group.

COALITION OF NPP FOOTSOLDIERS AGAINST CORRUPTION

One of the many reasons which brought the New Patriotic Party to power was the massive corruption of the erstwhile John Mahama administration.

In opposition, we justifiably listed a wide range of corrupt deals that the Mahama Government was involved in. Ghanaians listened to our cries because it was glaring to everybody that Mahama and his people were corrupt to the brim.

Almost two years into our government, there is very little to show for the numerous endemic corrupt cases which we sang back then.

Let us remind Madam Gloria Akuffo and her deputies of some of those cases we mentioned;

Since we came to power, several discoveries have also been made in many entities in which corruption can be detected.

The double salary saga which hit some past ministers who were also MPs has been left unattended to.

We have come to realize that the Attorney General, Madam Gloria Akuffo and her deputies are either not interested in prosecuting these landmark cases or they lack the competence to do so.

We in this coalition are asking the Attorney General to leave her office if she thinks she cannot handle these cases. Her lacklustre performance is giving us headaches.

We are using this medium to appeal to the President of the Republic, Nana Addo Dankwa Akufo-Addo to, as a matter of urgency, order the Attorney General to live up to expectations or sack her and her lieutenants!

We are losing the moral courage to tell Ghanaians the NDC is a bad case when it comes to corruption, and the refrain has always been ‘prosecute them if they are corrupt’.

Sadly enough, the one to prosecute these corrupt appointees of John Mahama appears to be sitting on the fence. We cannot look on while she fails to do the very work upon which she was appointed.

We are tired of hearing that the NDC was corrupt. If they were corrupt, which we all know they were, why is Madam Gloria Akuffo refusing to prosecute them? Is she in bed with them or what?

We the Coalition of NPP Footsoldiers against Corruption are giving Gloria Akuffo up to the end of this month or she leaves the position she occupies with her deputies for a more competent team to handle these cases.

Anything contrary to these demands would result in the coalition mobilizing our supporters across the length and breadth of this country to demonstrate against Madam Gloria Akuffo and her deputies.