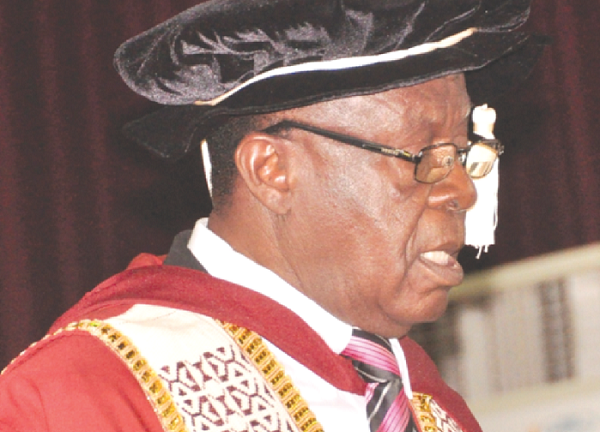 Chancellor of the Wisconsin International University College (WIUC) Ghana, Dr Paul Fynn has called on government to provide some support for private universities, particularly in the area of tax exemption.

He is asking government to withdraw the withholding tax levied on private universities, and according to him, when that is done, these universities can save some money to expand and introduce new courses.

Dr Fynn also asked the National Accreditation Board (NAB) to expedite the process for granting private universities the licence to run their programmes.

He expressed concern about the fact that most often applications by private universities to the NAB for licences to run various programmes took long before they were approved, and urged the Ministry of Education to intervene to address the issue.

Dr Fynn raised these concerns at a brief ceremony held at the school’s premises to reward four of its students who represented the university in the just-ended Graphic Business Tertiary Business Sense Challenge (TBSC) with full scholarships.

The college placed second out of 12 schools that participated in the TSBC, in which the participants answered questions on business, from economy through finance to entrepreneurship.

The scholarship beneficiaries – Evans Agyemang (level 400), Nana Kwasi Sarpong (level 400), Lariba Abiba Zackari (level 300) and Severin Koku Agbegbon, who was a back up for the team – were given GH₵200 each in addition as their transportation allowance.

In case any of them would want to pursue a postgraduate course with the university, that individual will enjoy a 30 per cent discount on the fees.

Those among the beneficiaries who have paid their fees for the current semester will have their fees refunded to them.

Two lecturers who coached them throughout the competition were also given GH₵1,000 each.

The reward package was announced when the management of WIUC, led by its chancellor, Professor Paul Fynn, met the contestants to congratulate them on their success and for making the school proud.

Dr Fynn described their performance in the competition as a sterling and remarkable achievement in the history of WIUC that would be remembered in a very long time to come.

He said the decision to provide them with full scholarships stemmed from the priority WIUC placed on academic excellence.

He expressed the hope that the package would send a strong signal to other students to strive for such excellence to make positive contributions towards the advancement of the institution.

The WIUC contestants received a Samsung tablet each, a life insurance cover worth GH¢20,000 and numerous souvenirs from sponsors.

The sponsors were the Ministry of Business Development, Access Brewery Limited, British Council, GLICO insurance, among others.