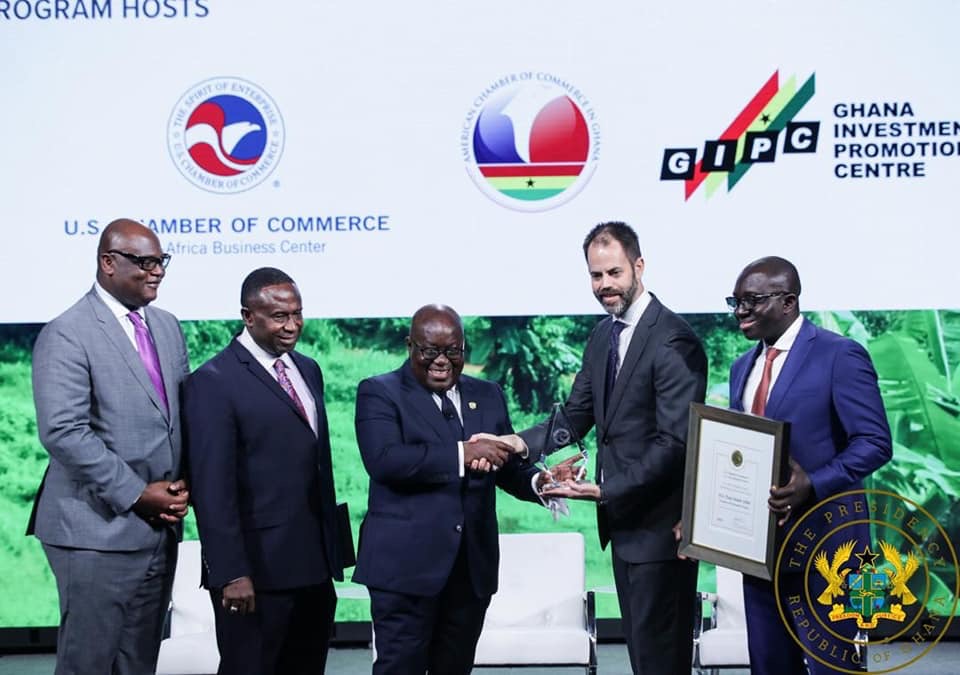 The President of the Republic, Nana Addo Dankwa Akufo-Addo has received the 2018 Outstanding Leader’s Award, given to him by the United States Chamber of Commerce and its U.S. Africa Business Centre.

Receiving the award on Monday, 24th September, 2018, President Akufo-Addo noted that “it is good to know that advocating for Ghana to opt for a partnership with the rest of the world on the basis of trade and investment co-operation, not aid, has its rewards.”

In his acceptance remarks, the President stated that the receipt of the award represents a summary of his focus as Ghana’s President, since assuming the reins of office some 21 months ago.

“I have sought not only to strengthen my country’s democratic credentials, but also to help create wealth and provide opportunities for its people,” he added.

Ghana, like most countries in Africa, the President said, is blessed with an abundance of human and natural resources, but has, however, over the years, been heavily reliant on the production and export of these natural resources, in their raw form.

“We have also not taken deliberate steps to create an educated workforce to spur on the development of our country. Unsurprisingly, we have not been able to bring sufficient progress and prosperity to the mass of Ghanaians. This sad state of affairs has deepened our reliance on aid, charity and handouts, thereby, making us vulnerable to the politics of foreign powers,” he said.

President Akufo-Addo told the gathering that his government has decided to buck this trend, as it is the only way his government can bring wealth to the Ghanaian people, and halt the dynamic of young men and women leaving the country in search of non-existent greener pastures abroad.

“We want, thus, to emulate the paths to prosperity taken by countries that have become today’s success stories, especially those of Asia,” the President added.