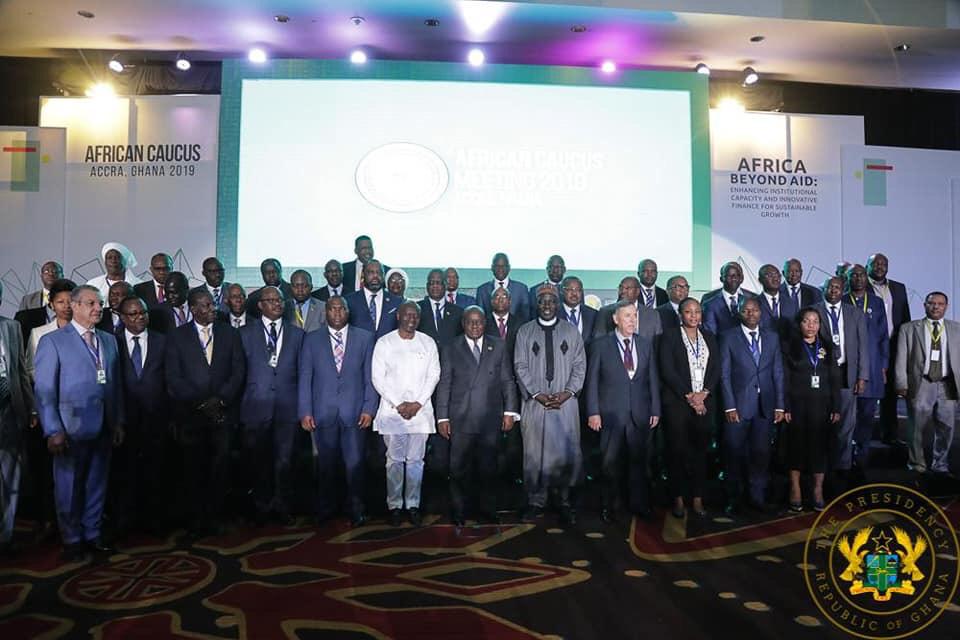 The President of the Republic, Nana Addo Dankwa Akufo-Addo, has charged Finance Ministers, Central Bank Governors and African Governors of the World Bank and International Monetary Fund to help realise the vision of a self-reliant Africa that is no longer dependent on the receipt of aid and charity.

Addressing the African Caucus Meeting of African Governors of the World Bank and IMF on Thursday, 1st August, 2019, President Akufo-Addo appealed to them to increase collaboration amongst themselves to enable them leverage even more resources for Africa’s development and transformation.

In order attain the vision of Africa Beyond Aid, the President told the gathering that “we will have to harness effectively our own resources, and deploy them creatively and efficiently for rapid economic and social transformation. We need a lot of resources to generate the prosperity we want in Africa.”

With 30% of the earth’s remaining minerals in Africa, and with the continent becoming an important player in the world production of coal, oil and gas, he bemoaned the fact that most of these resources are exported in their raw form, adding that “Africa does not derive its fair share of the values of these resources.”

This, President Akufo-Addo noted, can be corrected by African economies transforming themselves from raw material producing and exporting ones to economies based on value-addition and industrial activities, that is economies anchored on things made and grown in Africa.

In this respect, the creation, and the important role to be played by the African Continental Free Trade Area (AfCFTA), according to the President, has assumed catalytic proportions.

It will be recalled that the AfCFTA became operational this month after an Extraordinary AU Summit in Niamey, the capital of the Republic of Niger. Fifty-four (54) of the fifty-five (55) African countries have signed the agreement and 28 have ratified it. Twenty-two (22) ratifications were necessary for it to become operational.

Describing the AfCFTA as a game-changer with regards to moving Africa to a situation Beyond Aid, President Akufo-Addo indicated that the increased trade and investments emanating from the free trade area presents a significant boost to the continent’s efforts at industrialization and agricultural modernization.

“The prosperity will also come from the free movement of skilled Africans, moving across the continent to make better use of their talents, and contributing to growth and prosperity right here in Africa, rather than in other continents,” he added.

Touching on the creation of jobs for African youths, the President stated that it is the structural transformation of African economies that will enable jobs to be created for the teeming masses of African youths.

With Africa being the youngest in the world, with a median age of 19.5 years. By 2050, it is projected that Africa’s population will reach 2 billion, half of which will be under 25 years of age, and we will have the world’s largest labour force, i.e. 25 percent, compared to 14 percent in China and 7 percent in Europe.

This, he explained, is both a challenge and an opportunity.

“The opportunity is the chance for a youthful and dynamic workforce to drive African economies, and make the continent a powerhouse in the global economy,” President Akufo-Addo said.

He continued, “The challenge is how to provide this bulging population with the education, skills, digital literacy and vibrant economies that provide them with jobs and entrepreneurial opportunities.”

In Ghana, the President told the gathering that, despite predictable constraints on the nation’s resources from past years of mismanagement, his Government has made education in public schools from kindergarten to the senior secondary level, including technical and vocational schools, free.

“This has led to a rapid, dramatic expansion, in the last two academic years, of enrolment in senior high schools, as access has now been provided to many who were previously barred by poverty. But we know it is only the beginning. We will focus on building world-class educational institutions that will produce scholars, especially the scientists, engineers, technicians, and agricultural experts that will transform our economies and create remunerative jobs,” he added.

President Akufo-Addo told the African Caucus of Governors to feel privileged that they are in positions that offer opportunities to take action to enable Africa realise her possibilities, possibilities which, when realised, will give a great impetus to the expansion of the world economy, and to a substantial increase to global, general living standards.

“We should seize the occasion; each one of us in our various positions! Together, working with the people of Africa, and with our educated, skilled, dynamic and growing youthful population, we can build a prosperous and self-confident Africa, an Africa Beyond Aid. We can, and we should; so, let us get to work!” he said.